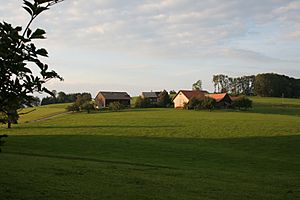 Oberwil in Waldkirch (Switzerland). About 3.100 people live in Waldkirch, which is near St. Gallen

A hamlet is a small settlement, smaller than a village. Usually, all settlers in a hamlet are centered around a single economic activity. A hamlet may consist of a farm, a mill, a mine or a harbor. All the people living there would be workers on that farm, mill, mine or harbour. Hamlets, especially those with a medieval church may have resulted from a medieval village, that was abandoned for some reason.

Because of the small size of the settlement, there are usually no buildings which have a central or admninistratrive function. There usually is no church, town hall or pub. Roads and streets in the hamlet do not have names, most of the time.5-6 families may live there usually within a 2km radius area.

In Germany, Austria, Switzerland and the Alsace region of France, such hamlets often have names that end in -wil, -wil(l)er, -wyhl or -viller.

All content from Kiddle encyclopedia articles (including the article images and facts) can be freely used under Attribution-ShareAlike license, unless stated otherwise. Cite this article:
Hamlet (place) Facts for Kids. Kiddle Encyclopedia.