Forestville is a hamlet in Chautauqua County, New York, United States. The population was 697 at the 2010 census. The hamlet is within the town of Hanover and in the northeast part of the county. It was an incorporated village from 1848 to 2016.

The first settlers were the Tupper brothers in 1805. The community began in 1808 as "Walnut Falls". Also known as "Moore's Hills," the name was changed to "Forestville" in 1820. The village was incorporated in 1848.

In 2015, following emergency loans from the county, the inhabitants were called to vote on the dissolution of the village. Dissolution was approved by a 137–97 vote. The Village of Forestville was officially dissolved on December 31, 2016. It should be reclassified as a census-designated place by the United States Census Bureau within the next couple years.

According to the United States Census Bureau, the hamlet has a total area of 0.97 square miles (2.5 km2), all of it land. Walnut Creek is joined by Tupper Creek north of the hamlet and flows northward to Lake Erie. 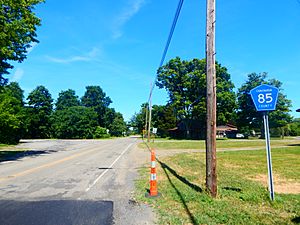 CR 85 at the Forestville-Hanover line

There were 304 households out of which 30.3% had children under the age of 18 living with them, 51.0% were married couples living together, 11.8% had a female householder with no husband present, and 31.3% were non-families. 25.0% of all households were made up of individuals and 10.5% had someone living alone who was 65 years of age or older. The average household size was 2.51 and the average family size was 2.99.

The Forestville Fall Festival, formerly known as the Forestville Apple Festival, is held yearly, the first weekend in October. It features products from the apple harvest, a craft fair, parade, special events and a harvest dinner.

All content from Kiddle encyclopedia articles (including the article images and facts) can be freely used under Attribution-ShareAlike license, unless stated otherwise. Cite this article:
Forestville, New York Facts for Kids. Kiddle Encyclopedia.