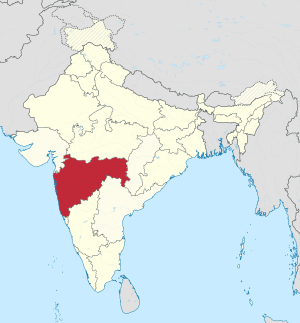 Map of Maharashtra, Republic of India

Maharashtra (Marathi: महाराष्ट्र) is the name of a state of India and its language is Marathi. It is the third-biggest state of India (the size of only two states are bigger). Only one Indian state has more people. Mumbai is the capital of Maharashtra. (Name ‘Mumbai’ comes from original name of the city, Mumbapuri.)

Maharashtra is in the west part of India on the coast of the Arabian Sea. Seven other states of India have borders with Maharashtra. It covers an area of 118,530 mi² (306,993 km²), it is bigger than Italy but smaller than Oman. In traditional Indian geography it falls under the West Indian zone.

Maharashtra has more business than any other one state of India.

Most people in Maharashtra are Hindus and you can see it in the culture of Maharashtra. There are many temples in Maharashtra and some of them are very old. The architecture of these temples is a mixture of architecture from North and South India. The temples also have ideas from Hindu, Buddhist and Jain cultures. Maharashtra has many forts like Raigad and Pratapgad which were very important in the early history of the Maratha Empire and also sea forts like the one at Sindhudurg.

The folk music of Maharashtra is mixed.

The theater, movies, and television in Maharashtra are mostly made in Mumbai, and the actors in each area (like television) can work in the others. Some important people in the movie industry are Dadasaheb Phalke, Dada Kondke, Ashok Saraf, Laxmikant Berde, Sachin Pilgaonkar, Mahesh Kothare and V. Shantaram. Early Marathi theatre had important playwrights (people who write plays) like Kolhatkar, Khadilkar, Deval, Gadkari and Kirloskar. They wrote musical plays called Sangeet Naatak. The music from those plays is called Natyasangeet. Important actors at this time were Bal Gandharva, Keshavrao Bhosle, Bhaurao Kolhatkar, and Dinanath Mangeshkar.

Some of the popular Marathi television channels are Mi Marathi and ETV Marathi. They have many kinds of shows: soap operas, cooking, travel, political satire, and game shows.

The food of Maharashtra is different in each place. The people in the Konkan region eat more rice and the ones near the ocean eat a lot of fish. In eastern Maharashtra, most people eat a lot of wheat, jowar, and bajra. Other important things people eat in Maharashtra are lentils, onions, tomatoes, potatoes, chilies, garlic, ginger, and aamras. Many people also eat chicken and mutton.

Cricket is very popular in Maharashtra. Many people play it and many others watch it. Kabaddi is also popular. Children play Viti-Dandu and Pakada-pakadi (Tag).

Hindus in Maharashtra follow the Saka era calendar. Gudi Padwa, Diwali, Rangapanchami, Gokulashtami, and Ganeshotsav are some of the festivals that are celebrated in Maharashtra. Ganeshotsav is the biggest festival. The Hindus celebrate it with reverence and festivity in Maharashtra and it has also become popular in other parts of India. The festival which lasts ten days is in honor of Ganesha, the Hindu god of learning and knowledge.

All content from Kiddle encyclopedia articles (including the article images and facts) can be freely used under Attribution-ShareAlike license, unless stated otherwise. Cite this article:
Maharashtra Facts for Kids. Kiddle Encyclopedia.