Kids Encyclopedia Facts
This article is about Iranian city. For the woman's clothing, see Sari (clothing). 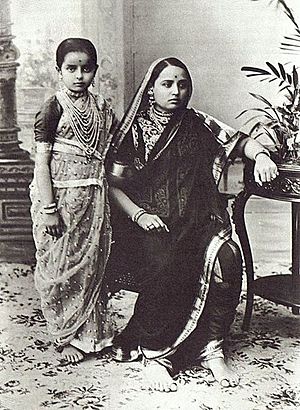 A sari, saree or shari is a women's garment from the Indian subcontinent that consists of a drape varying from 4.5 to 8 meters (5 to 9 yards) in length and 60 to 120 centimetres (2 to 4 feet) in breadth that is typically wrapped around the waist, with one end draped over the shoulder, baring the midriff. There are various styles sari manufacture and draping, the most common being the Nivi style, which originated in the Deccan region. The sari is worn with a fitted bodice commonly called a choli (ravike in southern India, and cholo in Nepal) and a petticoat called parkar or ul-pavadai. In the modern Indian subcontinent, the sari is considered a cultural icon.

All content from Kiddle encyclopedia articles (including the article images and facts) can be freely used under Attribution-ShareAlike license, unless stated otherwise. Cite this article:
Sari Facts for Kids. Kiddle Encyclopedia.