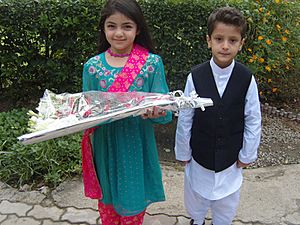 A woman in Selçuk, Turkey wearing traditional Turkish trousers similar to a salwar.

Salwar kameez (also spelled shalwar kameez or shalwar qameez) is a traditional dress worn by both women and men in Southern Asia. Salvars or shalvars are loose pajama-like trousers. The legs are wide at the top, and narrow at the bottom. The kameez is a long shirt or tunic. The side seams (known as the chaak) are left open below the waist-line, which gives the wearer greater freedom of movement. It is the most common dress for men in Pakistan and Afghanistan.

All content from Kiddle encyclopedia articles (including the article images and facts) can be freely used under Attribution-ShareAlike license, unless stated otherwise. Cite this article:
Salwar kameez Facts for Kids. Kiddle Encyclopedia.