Kabul is the capital of Afghanistan and its largest city, located in the eastern section of the country. It is also a municipality, forming part of the greater Kabul Province. According to estimates in 2015, the population of Kabul is 4.635 million, which includes all the major ethnic groups. Rapid urbanization had made Kabul the world's 75th largest city.

Kabul is located high up in a narrow valley between the Hindu Kush mountains, with an elevation of 1,790 metres (5,873 ft) making it one of the highest capitals in the world. The city is said to be over 3,500 years old, mentioned since at least the time of the Achaemenid Empire. It is at a strategic location along the trade routes of South and Central Asia, and a key location of the ancient Silk Road. Kabul became the capital of Afghanistan in 1776, during the reign of Timur Shah Durrani, the son of Ahmad Shah Durrani. 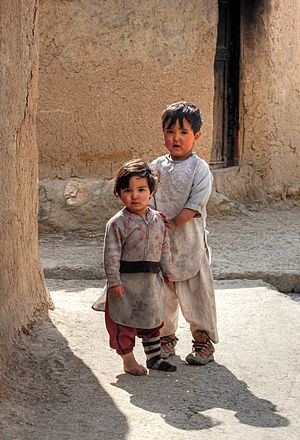 In the early 19th century, the British occupied the city but after establishing foreign relations they were compelled to withdraw all forces from Afghanistan. The city was occupied by the Soviets in 1979 but they too abandoned it after the 1988 Geneva Accords were signed. A civil war in the 1990s between various rebel groups destroyed much of the city, resulting in many casualties.

Kabul is known for its gardens, bazaars, and palaces. It was also formerly a travel destination for young western hippies. Since the removal of the Taliban from power in late 2001, the city began rebuilding itself with assistance from the international community. Despite the many terrorist attacks by anti-state elements, the city is developing and was the fifth fastest-growing city in the world as of 2012. The city is divided into 22 districts.

Each year about 20,000 foreign tourists visit Afghanistan. Most visitors prefer lodging at guest houses, which are found all over the city. The better and safer ones are in the Wazir Akbar Khan neighborhood where the embassies are located.

The old part of Kabul is filled with bazaars along its narrow, crooked streets. Cultural sites include the National Museum of Afghanistan, Bala Hissar - a fort destroyed by the British in 1879, now restored as a military college. There is also the Kolola Pushta fort, which is still guarded by the Afghan Army, and the nearby 19th-century Shahrara Tower fort, which was ruined in 1928. 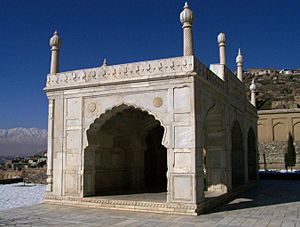 16th-century mosque inside the Gardens of Babur

Tappe-i-Maranjan is a nearby hill where Buddhist statues and Graeco-Bactrian coins from the 2nd century BC have been found. Outside the city is a citadel and the royal palace. Paghman and Jalalabad are interesting valleys west and east of the city.

All content from Kiddle encyclopedia articles (including the article images and facts) can be freely used under Attribution-ShareAlike license, unless stated otherwise. Cite this article:
Kabul Facts for Kids. Kiddle Encyclopedia.