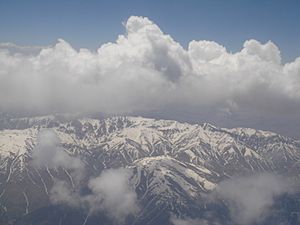 The Hindu Kush is a range of mountains. It starts near Pamir in the north of Gilgit extending in the southwest deep into the Khyber Pakhtunkhwa province of Pakistan, Tirich Mir is here. On the west of this range is the Wakhan corridor of Afghanistan which separates Gilgit Agency from Tajikistan. This tract of land was formed under an agreement between the governments of the Empires of Russia and Britain in 1890. It was annexed with Afghanistan to serve as a neutral zone between the two empires.

The passes of Mintaka Pass, Kilik Pass, Chilinji Pass and Kuramber Pass are in the Hindu Kush range and connect Kashmir with the central Asian states. Many rivers including the Chapursan River, Ishkuman River, Ghizar River, Gilgit River and Shandur River originate in the valleys of Hindu kush and ultimately join the Indus River.

All content from Kiddle encyclopedia articles (including the article images and facts) can be freely used under Attribution-ShareAlike license, unless stated otherwise. Cite this article:
Hindu Kush Facts for Kids. Kiddle Encyclopedia.