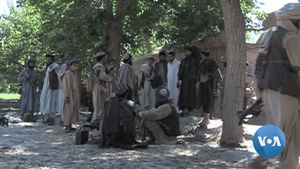 Taliban fighters, during the 2021 offensive
Not to be confused with the Tehrik-i-Taliban Pakistan. 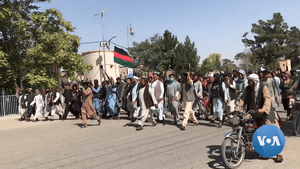 Armed civilians protesting against the Taliban, in July 2021 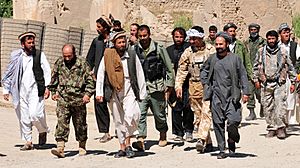 Taliban fighters wanting to leave the Taliban, in 2010

In 1994 Taliban started a government in southern Afghanistan called the Islamic Emirate of Afghanistan. The first leader of the Taliban was Mullah Mohammed Omar.

The Taliban governed Afghanistan between 1996 and 2001. During this time, its leaders put in place the strictest forms of Sharia law ever seen in the Muslim world. Much criticism of the Taliban came from important Muslim scholars. For example, if a thief was caught stealing something the Taliban would cut off one of his hands so that he does not use it to steal again, no matter what it was that he stole. Many criminals were put to death without a fair trial and were executed in public. Anyone who refused to follow the law was considered a non-Muslim enemy. Every male had to go to mosque for prayer (except Afghan non-Muslims) during praying times, which is five times per day.

The Taliban became known around the world for their very bad treatment of women, denying them human rights. They also treated the Shia Muslim (who they consider heretics) and non-Muslim minorities (who are Hindus and Sikhs) very badly. Every form of art, music and entertainment was strictly banned under their rule, and sculptures, paintings, photos, cameras, televisions, etc. were destroyed. The Taliban also did cultural genocide when they destroyed the Buddhas of Bamiyan in February and March 2001, because they consider the display of human and animal figures a sin.

After the September 11 attacks in 2001, the United States invaded Afghanistan. The Taliban had been giving its ally al-Qaeda a safe base from which to operate. The United States government said that Osama bin Laden and al-Qaeda members did the attacks in the U.S. The Taliban asked the U.S. for proof of this before it would arrest them. The aim of the invasion was to remove the Taliban government from power, destroy al-Qaeda and capture bin Laden. After losing power in 2001, the Taliban had its headquarters in Pakistan.

It is estimated that in 2020 the Taliban had an income of $1.6 billion, a big part of which came from illegal activities. Other sources of income include mining, taxes, donations (or gifts) and exports.

For more details, see Treatment of women by the Taliban

In the past, the Taliban had views on society that are stricter than those of many other Islamic countries:

They had the following rules for girls and women:

In 2011, the Afghan Independent Human Rights Commission (AIGRC) said that Taliban fighters targeting civilians was a "war crime". Religious leaders condemned the attacks on civilans, saying they were against Islamic ethics.

When they took control of the country, the Taliban promised an amesty to the fighters and officials of the former government. At the end of 2021, a few months after the Taliban taking control, Human Rights Watch, and other organisations have documented summary executions of these people. The United States, the European Union, and several other countries have therefore told the Taliban that they should keep the promise they gave.

Relationship with other countries

Relationship with militant groups (outside Afghanistan)

Tehrik-i-Taliban Pakistan operates in northwestern Pakistan and is sometimes called the Pakistani Taliban, but they are a separate group.

Before the beginning of Tehrik-i-Taliban some of its (later) leaders and fighters were part of the 8,000 Pakistani militants fighting in the War in Afghanistan (1996–2001) and the War in Afghanistan (2001–present) against the United Islamic Front and NATO forces. Most of them come from the Pakistani side of the Af-Pak border regions. After the fall of the Afghan Taliban in late 2001 most Pakistani militants including members of today's TTP escaped (home) to Pakistan.

At the peace talks in Doha, there is little or no progress (as of 2021's third quarter).

All content from Kiddle encyclopedia articles (including the article images and facts) can be freely used under Attribution-ShareAlike license, unless stated otherwise. Cite this article:
Taliban Facts for Kids. Kiddle Encyclopedia.