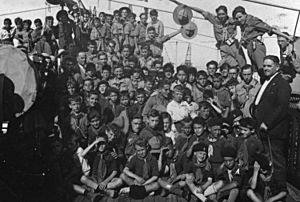 How the word is created

The word "public" comes from the Latin publicus, or "of the people".

Social publics are people who like the same ideas or hobbies. 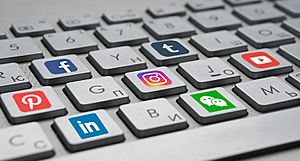 Social media is one of the things that create networked publics.

The five key concepts in this theory are:

This theory comes from James E. Grunig's writing, "The Role of Information in Economic Decision Making" in 1966. This writing was the beginning of the situational theory of publics, as it had the first key idea, problem recognition, in the writing. Then, when he wrote about the decisions of people who own land in Columbia to become a professor, he also wrote about the second key idea, constraint recognition. He then added Herbert Krugman's idea of the third key idea, level of involvement, to explain the difference between the fourth and fifth key ideas, information seeking and information processing. After that, he wrote a book in 1984 which was named "Managing Public Relations", which further made the situational theory of publics make more sense, based on John Dewey's book, which was named "The Public and Its Problems".

Equations, such as the one shown above, helped make the situational theory of publics make more sense. 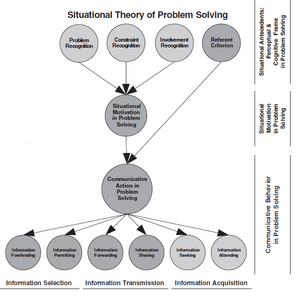 Even though the theory is well developed, it develops even more common. The theory has been used to show why people join groups who really want things to happen (activist groups), to organize the external (real, actual) and internal (perceived) parts (dimensions) of problem recognition, and to learn whether information that is used in information processing (processed information) can create publics. Also, some more research was done on the internal and external dimensions of problem recognition, constraint recognition, and level of involvement (Grunig & Hon, 1988; Grunig, 1997). The research is about whether the ideas are internal or external. The research shows that if the concepts are internal, they can be changed by communication, and that if they are external, then the holdable things that are around the person need to be changed in order for the person's concept of the variables to change (Grunig, 1997, p. 25). But, there is a small amount of research on the internal and external dimensions of the three key concepts, so there can be more studies on these concepts (Grunig, 1997). Then, in 2011, Jeong-Nam Kim and Grunig extended the theory to the situational theory of problem solving.

All content from Kiddle encyclopedia articles (including the article images and facts) can be freely used under Attribution-ShareAlike license, unless stated otherwise. Cite this article:
Public Facts for Kids. Kiddle Encyclopedia.