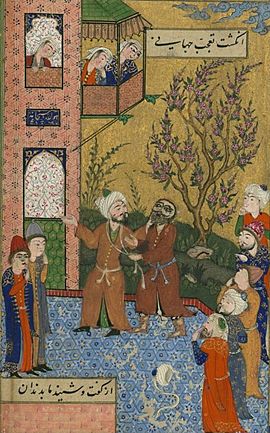 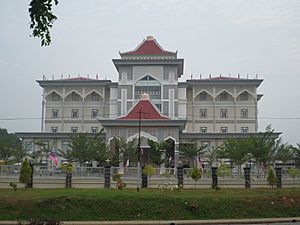 Sharia, Sharia law or Islamic law is a set of religious principles which form part of the Islamic culture. The Arabic word sharīʿah (Arabic: شريعة‎code: ar is deprecated ) refers to the revealed law of God and originally meant "way" or "path".

Classical sharia deals with many aspects of public and private life, including religious rituals, family life, business, crimes, and warfare. In former times, sharia was interpreted by independent jurists, who based their legal opinions on Qur'an, Hadith and centuries of debate, interpretation and precedent. Some parts of sharia can be described as "law" in the usual sense of that word, while other parts are better understood as rules for living life in accordance with God's will.

Modern countries in the Muslim world all have their own laws. In most of them only a small part of the legal system is based on classical sharia. Muslims disagree on how sharia should be applied in the modern world.

Islamic scholars who lived during the first centuries of Islam developed different methods for interpreting sharia. Most of them came to agree that sharia rules should be derived from the following main sources:

The process of deriving sharia rules from the Qur'an and hadith is called ijtihad. Sharia rules classify actions into one of the following categories:

Sharia in Islam is viewed as the revealed law of God, which cannot be altered. On the other hand, its interpretation, called fiqh, is the work of legal scholars, who have frequently differed in their legal opinions. Some parts of sharia are similar to what people in the West call "law", while other parts are better understood as rules for living life in accordance with God's will.

There are several schools of legal thought in Islam, of which the most important are the Hanafi, Maliki, Shafi'i and Hanbali schools of Sunni Islam and the Ja'fari school of Shia Islam.

All content from Kiddle encyclopedia articles (including the article images and facts) can be freely used under Attribution-ShareAlike license, unless stated otherwise. Cite this article:
Sharia Facts for Kids. Kiddle Encyclopedia.