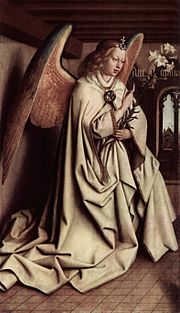 Gabriel (meaning "God is my strength" or "man of God"), in the Bible is an angel, specifically an archangel (arch means "highest" or "chief").

The greeting of the Angel Gabriel opens the prayer Ave Maria.

In the Christian calendar, the Archangel Gabriel is celebrated together with the Archangels Michael and Raphael on September 29th.

Gabriel has sometimes been used as a given name in English-speaking counties because of a Continental European influence. Cognates: Hungarian: Gábor. Italian: Gabriele. Finnish: Kaapo. The feminine form of the name Gabriel is Gabrielle.

Archangel Gabriel in the Bible

Gabriel is first mentioned in the Bible, in the book of Daniel, when he appeared to Daniel. In the New Testament, St. Gabriel appears first in the book of Daniel in the Old Testament, the angel announced to Daniel the prophecy of the seventy weeks. And most famously, to Mary to announce the coming birth of Jesus. The Catholic feast of the Annunciation celebrates this visit every year, nine months before Christmas.

The Bible does not say angels have wings, but Christian artists usually show them that way.

All content from Kiddle encyclopedia articles (including the article images and facts) can be freely used under Attribution-ShareAlike license, unless stated otherwise. Cite this article:
Gabriel Facts for Kids. Kiddle Encyclopedia.