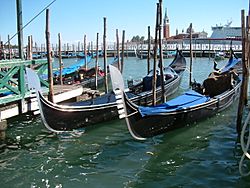 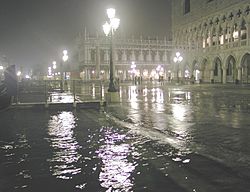 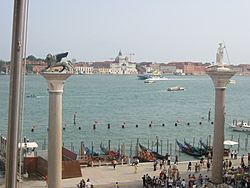 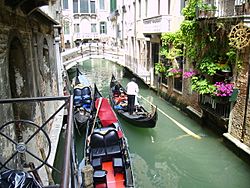 The flag of Venice 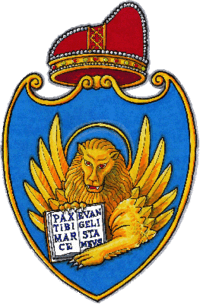 The coat of arms of Venice

Venice is a city in Italy. It is the capital of the Veneto region, which is in the north-east of the country. The population of the 'Comune di Venezia', which is Venice, its lagoon and its mainland is 271,367. Area is 412 km². The population of Venice itself keeps on shrinking at an alarming rate and is now under 55000 locals.

Venice is built on 118 small islands that are separated by 150 canals. People cross the canals by many small bridges. They can also navigate across the city on boats, both rowing boats and motor boats. The most famous Venetian type of boat called a gondolas. The buildings in Venice are very old and attractive, and tourists come from all over the world to see them and the canals. This has made Venice one of the most famous cities in the world. The most famous sights are the Rialto Bridge, St Mark's Basilica and the Doge's Palace. It is important to remember that Venice is much more than few landmarks and that we owe the city a lot: from words to objects or services of our daily life. Its lifestyle and culture are unique in the world and it can get confusing at first.

There are several problems in Venice, but it is still the most popular tourist attraction in northeast Italy. Every year the city sinks a few millimeters because the ground is made from mud. Eventually, the city might be completely underwater, but that would take decades. Because of this, the Italian government is building the MOSE Project, a state-of-the-art defense against the sea-water flooding, that will safely protect Venice indefinitely.

The city was founded by people from the greater Veneto region as a refuge from the Barbarian invasions, when the Western Roman Empire fell. During the Middle Ages, Venice slowly grew to become an important commercial city. Around the year 1000 AD the Republic of Venice started to create an empire in the eastern Mediterranean Sea. It lasted until 1797, when it was annexed by Napoleon's France. It then changed hands a few times, becoming a part of Austria two times, before becoming part of Italy during the Italian unification. Venice deeply influenced the Venetian, Istrian and Dalmatian coasts for one thousand years.

Venice started to lose population after its conquest by Napoleon, but with the unification of Italy the city returned to be an important city. It is actually one of the most visited places on Earth by tourists from all around the globe.

There are several ways to get around in Venice. The most common is walking and using the vaporetto, which is a water bus which carries lots of people around the city. The vaporetto goes around the City and on the Grand Canal, it does not enter the small canals of the city. To see Venice from the small canals, most tourists use the gondola. Taxi boats can also be used to move around the city and its lagoon. The Grand Canal is long and can be crossed only on a few bridges. A simple way to cross it is to take one of the traghetti (ferries). The streets, Vaporetti, and traghetti are used by the locals, it is important to remember that they are their ways to move around the city to go to school, work and do their errands.

Usually, the warmest month is July and the coolest month is January. The maximum average precipitation occurs in November. The season of the acqua alta, high waters, are generally November to February. During the acqua alta season, the city can be partially flooded for a couple of hours on certain days.

Venice has incredible crafts, culture, and tradition. Shopping for handmade goods such as masks, Murano glass jewels, etc. is a must. These days, however, mass tourism led Venice to be invaded by many shops selling low-quality souvenirs.

Buying from the authentic local businesses has never been more important as it is essential to the future of the Venetians and is also the only guarantee for you to get a quality product. It is not easy, though. Thankfully, there is a social enterprise based in Venice, which works closely with the Venetian business owners, shops, restaurants, and bars included. They have a certification process where the local artisan shops attest and commit to selling products that are both authentic and sustainable as well as to give a 10% discount to the customers carrying a "Venezia Autentica Friends' Pass" ( buyable online for only 10 euros). The shops are part of the program are easy to spot thanks to a sticker on their door.

All content from Kiddle encyclopedia articles (including the article images and facts) can be freely used under Attribution-ShareAlike license, unless stated otherwise. Cite this article:
Venice Facts for Kids. Kiddle Encyclopedia.