Regions of Italy facts for kids 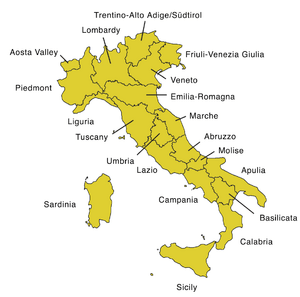 |caption=The first-level constituent entities of the Italian Republic |innerstyle=border:none; }} Italy is a country in the south of Europe. It is divided into 20 regions. A region is a part of the country with a government and a president.

In some regions, people speak other languages. In Alto Adige/Südtirol a lot of people speak mainly German. So this region is "special" and can decide more things.

Sardinia and Sicily are islands. They have different problems than other regions. They have also some different laws. These regions are called "regions with special laws" (Italian: Regione a statuto speciale).

Every region has a capital. Here is the list of the regions, the capital and other information.

All content from Kiddle encyclopedia articles (including the article images and facts) can be freely used under Attribution-ShareAlike license, unless stated otherwise. Cite this article:
Regions of Italy Facts for Kids. Kiddle Encyclopedia.