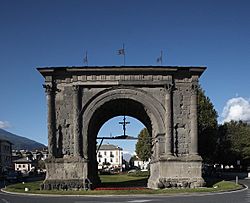 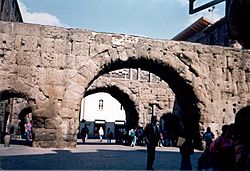 Porta Prætoria: The Praetorian Gate, the eastern entrance to the Roman city

Aosta (Italian: Aosta, French: Aoste) is a city in northern Italy. It is the capital city of the Valle d'Aosta (French: Vallée d'Aoste) region. It is roughly in the middle of the region, along the Dora Baltea (French: Doire baltée), the main river that flows in the valley. It is at 583 m above sea level. Around the city there are many mountains (the Alps).

Romans conquered the area in 25 BC. Later, the city was conquered by the Frankish Empire after the fall of the Western Roman Empire. Finally, it went under control of the House of Savoy in the 11th century. Many Roman buildings still survive in the city, like the east and south gates. The basic plan of the city, with rectangular blocks of streets, is Roman.

The valley of Aosta is a typical alpine valley, cut into a V-shape by glaciers during the ice age. It runs from an upper part near Mont Blanc to lower areas like the city of Aosta.

The Romans defeated the local Salassi tribe in 25 BC. Their commander, Marcus Terentius Varro, then founded the Roman colony of Augusta Praetoria Salassorum, housing 3,000 retired veterans.

After 11 BC Aosta became the capital of the Alpes Graies ("Grey Alps") province of the Empire.

The valley was a way for trade and soldiers to get from Italy to Gaul (later, France). This explains its importance to the Romans. Now it sits near the Italian entrance of the Mont Blanc Tunnel.

At present Aosta Valley is a semi-autonomous region in northwestern Italy. It is the smallest region in Italy, and is not divided into provinces.

Aostan French (French: français valdôtain) is the variety of French spoken in the Aosta Valley, where many speak some form of French. Some expressions, words and phrase constructions are different from standard French; some are similar to Swiss French. Some words come from the Piedmontese language or Italian. Both modern French and Italian mix with this local patois, valdôtain, which is Franco-Provençal in type. 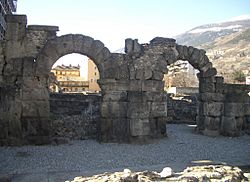 Remains of the Roman theatre

All content from Kiddle encyclopedia articles (including the article images and facts) can be freely used under Attribution-ShareAlike license, unless stated otherwise. Cite this article:
Aosta Facts for Kids. Kiddle Encyclopedia.