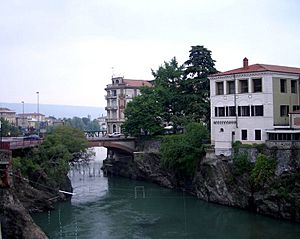 The river at Ivrea

As it crosses the Aosta Valley, the Dora Baltea flows through the city of Aosta (where the Buthier, a small river, runs into it) and near all the main cities of the lower Aosta Valley: Châtillon, Saint-Vincent, Verrès and Pont-Saint-Martin. After it enters the Piedmont region, it passes through the city of Ivrea and a good part of Canavese, gets from its right hand the waters of the Chiusella and reaches the Po at Crescentino.

The main tributaries of the Dora Baltea are (beginning at the source):

The mean monthly discharges (in m³) for the years 1951-1991 in the confluence with the Po river were:

Dora Baltea is a popular place for the practice of sports like canoeing, kayaking and similar water sports.

All content from Kiddle encyclopedia articles (including the article images and facts) can be freely used under Attribution-ShareAlike license, unless stated otherwise. Cite this article:
Dora Baltea Facts for Kids. Kiddle Encyclopedia.