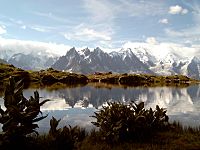 Mont Blanc (Monte Bianco in Italian) is a mountain in the Alps. Its height is 4810.90 metres.

When Mount Elbrus (5,642 m) in the Caucasus is left out, Mont Blanc is often considered the highest point in Europe.

Mont Blanc is on the Italy/France border. 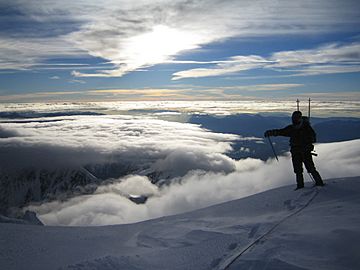 The summit of Mont Blanc is a thick, perennial ice-and-snow dome whose thickness varies. No exact and permanent summit elevation can therefore be determined, though accurate measurements have been made on specific dates. For a long time, its official elevation was 4,807 m (15,771 ft). In 2002, the IGN and expert surveyors, with the aid of GPS technology, measured it to be 4,807.40 m (15,772 ft 4 in).

After the 2003 heatwave in Europe, a team of scientists re-measured the height on 6 and 7 September. The team was made up of the glaciologist Luc Moreau, two surveyors from the GPS Company, three people from the IGN, seven expert surveyors, four mountain guides from Chamonix and Saint-Gervais and four students from various institutes in France. This team noted that the elevation was 4,808.45 m (15,775.8 ft), and the peak was 75 cm (30 in) away from where it had been in 2002.

After these results were published, more than 500 points were measured to assess the effects of climate change and the fluctuations in the height of the mountain at different points. Since then, the elevation of the mountain has been measured every two years.

The interpretation that the heatwave had caused this fluctuation is disputed because the heatwave is known not to have significantly affected the glaciers above 4,000 m (13,000 ft). The height and position of the summit could have been moved by general glacial forces. At this elevation, the temperatures rarely rise above 0 °C (32 °F). During the summer of 2003, the temperature rose to 2 °C (36 °F), and even 3 °C (37 °F), but this would not have been enough for the ice to melt that amount.

A panoramic view of Mont Blanc from Aiguille du Midi

All content from Kiddle encyclopedia articles (including the article images and facts) can be freely used under Attribution-ShareAlike license, unless stated otherwise. Cite this article:
Mont Blanc Facts for Kids. Kiddle Encyclopedia.