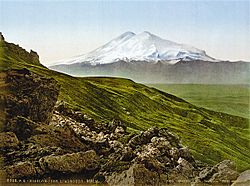 Mount Elbrus (Russian: Эльбрус, Karachay-Balkar: Минги тау) is a peak in the western Caucasus mountains. It is in Kabardino-Balkaria and Karachay-Cherkessia, Russia, near the border of Georgia. It consists of two peaks. The western peak has a height of 5,642 metres (18,510 ft), the eastern peak is 5,621 metres (18,442 ft) high.

Mount Elbrus is an inactive volcano, with a glacier on top. The western peak still has a crater with a diameter of about 250 metres (820 ft). No eruptions have been recorded, but there are other signs of volcanic activity, namely hot springs in the area. There last eruption happened in the first century.

All content from Kiddle encyclopedia articles (including the article images and facts) can be freely used under Attribution-ShareAlike license, unless stated otherwise. Cite this article:
Mount Elbrus Facts for Kids. Kiddle Encyclopedia.