Dormant volcanos are the volcanoes that are quiet, but might possibly erupt again. A dormant volcano is "sleeping," but it could awaken in the future.

Dormant volcanos include those which have not erupted in the past 10,000 years. 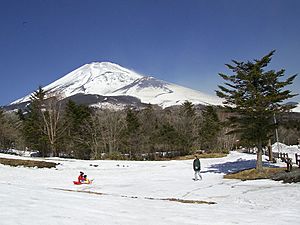 The "Hōei crater" is visible to the right of the peak of Mount Fuji. It was created in 1707.

It is difficult to distinguish active and inactive volcanos.

For example, some scientists have described Mount Fuji as dormant or inactive. The volcano that has been dormant since its last eruption in 1707, but is also classified as active. According to the Geological Survey of Japan, Mount Fuji is considered among the active volcanoes on the island of Honshu.

Mis-labeled as dormant or extinct

Some volcanoes may remain dormant for a long time; and an eruption is a surprise.

Before 79 AD, Vesuvius was considered dormant.

Before 1991, the Pinatubo volcano in the Philippine was labeled as dormant.

Before 1995, the Soufrière Hills volcano on the island of Montserrat was dormant.

There are many examples of volcanoes which are considered dormant.

All content from Kiddle encyclopedia articles (including the article images and facts) can be freely used under Attribution-ShareAlike license, unless stated otherwise. Cite this article:
Dormant volcano Facts for Kids. Kiddle Encyclopedia.