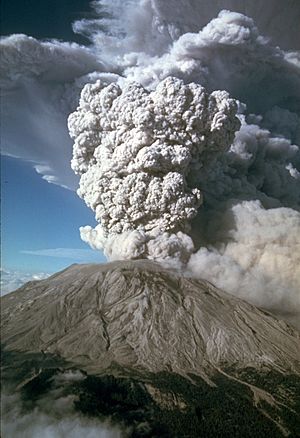 List of active volcanoes includes volcanoes which are erupting, or have erupted in modern times. Many volcanos have erupted dozens of times in the past few thousand years, but are not erupting at this moment. Some scientists consider a volcano active if it has erupted in the holocene (historic times) period.

Most volcanoes live many thousands of years and erupt many times. However, most do not erupt even once in a human lifespan. Signs of unrest such as unusual earthquake activity or significant new gas emissions are signs that a volcano is active. An example of an active volcano is Mount St. Helens in the United States (US).

There are more than 1,500 volcanoes that could be active today. An estimated 500 million people live near active volcanoes.

Planet Venus has more volcanoes than Earth. Some may be active.

The Pacific "Ring of Fire" is an arc around the Pacific Ocean where there are 400+ volcanoes. 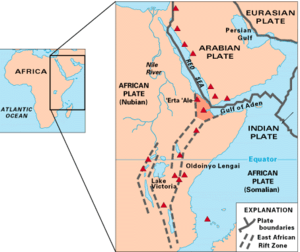 Active volcanos of East Africa are shown as red triangles

Other regions of active volcanoes include the Mediterranean Sea, the Atlantic Ocean and other places.

All content from Kiddle encyclopedia articles (including the article images and facts) can be freely used under Attribution-ShareAlike license, unless stated otherwise. Cite this article:
List of active volcanoes Facts for Kids. Kiddle Encyclopedia.