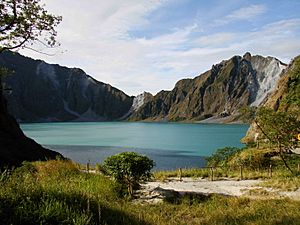 Mount Pinatubo is a stratovolcano on Luzon in the Philippines. It is near the Tri-Cabusilan Mountain range, separating Luzon's west coast from the central plains.

Before 1991 the volcano was inconspicuous and heavily eroded. It was covered with dense forest, and several thousand indigenous people lived there. The volcano erupted in June 1991, destroying thousands of buildings and houses and killing over 800 people. Mount Pinatubo's eruption effects were felt worldwide. There is now a caldera where before was the central cone.

It erupted in June 15, 1991 and is located on the island of Luzon in the Phillipines. Many Lahars and pyroclastic flows damaged much of the infrastructure of the country. They also killed upwards of 800 people. Officials at the US marine base were able to evacuate many people, but property damage was costly, totaling billions of phillipine pesos.

All content from Kiddle encyclopedia articles (including the article images and facts) can be freely used under Attribution-ShareAlike license, unless stated otherwise. Cite this article:
Mount Pinatubo Facts for Kids. Kiddle Encyclopedia.