Central Luzon (Filipino: Gitnáng Luzon, designated as Region III (or Region 3), is central part of Luzon, The region has the largest plain in the country and produces most of the country's rice supply. Its provinces are Aurora, Bataan, Bulacan, Nueva Ecija, Pampanga, Tarlac, and Zambales.

Central Luzon Region is north of Manila, the nation's capital. To the north are Ilocos, Cordillera Administrative Region and Cagayan Valley. To the south are the National Capital Region, CALABARZON and Manila Bay. To the west is the South China Sea. To the east is the Philippine Sea.

There are fourteen cities which include: Balanga in Bataan; Malolos, Meycauayan and San Jose del Monte in Bulacan; Cabanatuan, Gapan, Muñoz, Palayan and San Jose in Nueva Ecija; Angeles, Mabalacat and San Fernando in Pampanga; Tarlac in Tarlac; and Olongapo in Zambales. Central Luzon produces the most rice in the whole country. Excess rice is delivered and imported to other provinces of the Philippines.

The City of San Fernando, in Pampanga, is the regional center.

Aurora was transferred from Region IV by Executive Order No. 103.

In 2000, 86.9% of the population of Central Luzon was Roman Catholic. Other religions include Iglesia Ni Cristo, Aglipayan, Evangelicals, United Methodist, Jehovah's Witnesses, Seventh-day Adventist and United Church of Christ in the Philippines. In addition there are smaller numbers of other religions. 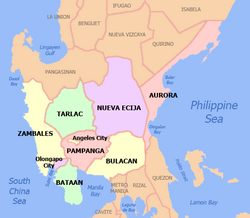 Central Luzon has fourteen cities. San Jose del Monte is the city with the most population. Meycauayan is the most densely populated city in the region. Tarlac City is the largest based on land area.

All content from Kiddle encyclopedia articles (including the article images and facts) can be freely used under Attribution-ShareAlike license, unless stated otherwise. Cite this article:
Central Luzon Facts for Kids. Kiddle Encyclopedia.