The Philippine Sea is a marginal sea east and northeast of the Philippines occupying an estimated surface area of 5 million square kilometres (2 million square miles). The Philippine Sea Plate forms the floor of the sea, which forms a portion of the western North Pacific Ocean. It is bordered by the Philippine archipelago (Luzon, Catanduanes, Samar, Leyte and Mindanao) on the southwest; Halmahera, Morotai, Palau, Yap, and Ulithi (of the Carolines) on the southeast; the Marianas, including Guam, Saipan, and Tinian, on the east; the Bonin and Iwo Jima on the northeast; the Japanese islands of Honshu, Shikoku, and Kyūshū on the north; the Ryukyu Islands on the northwest; and Taiwan in the west.

The sea has a complex and diverse undersea relief. The floor is formed into a structural basin by a series of geologic faults and fracture zones. Island arcs, which are actually extended ridges protruding above the ocean surface due to plate tectonic activity in the area, enclose the Philippine Sea to the north, east and south. The Philippine archipelago, Ryukyu Islands, and the Marianas are examples. Another prominent feature of the Philippine Sea is the presence of deep sea trenches, among them the Philippine Trench and the Mariana Trench, containing the deepest point on the planet. 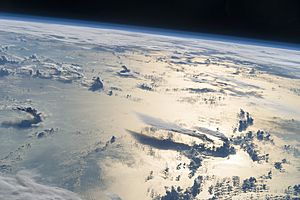 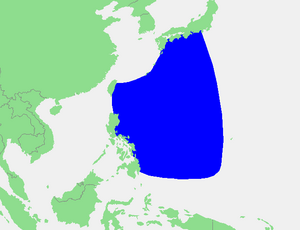 Location of the Philippine Sea

All content from Kiddle encyclopedia articles (including the article images and facts) can be freely used under Attribution-ShareAlike license, unless stated otherwise. Cite this article:
Philippine Sea Facts for Kids. Kiddle Encyclopedia.