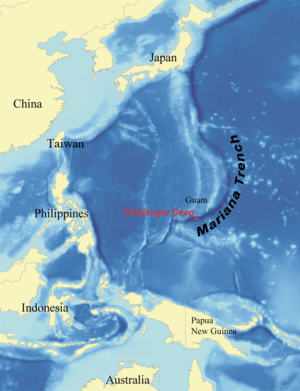 Location of the Mariana Trench 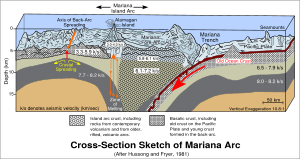 The Pacific plate is subducted above the Mariana Plate, creating the Mariana trench, and (further on) the arc of the Mariana islands, as water trapped in the plate is released and explodes upward to form island volcanoes.

The deepest part of the trench is known as the Challenger Deep. It is named after the British Royal Navy survey ship HMS Challenger, whose expedition of 1872–76 made the first recordings of its depth.

The Challenger Deep has been reached four times by submersibles, namely the manned bathyscaphe Trieste on 23 January 1960, the unmanned robotic deep-sea probes Kaiko (Japanese) in 1995 and Nereus (U.S.) in 2009, and by James Cameron in the Deepsea Challenger on 26 March, 2012. Cameron was able to film a 3D movie of the bottom of the trench.

The HMS Challenger expedition found radiolaria in the two dredged samples taken when the Challenger Deep was first discovered.

On their 1960 descent, the crew of the Trieste noted that the floor consisted of diatomaceous ooze and reported observing "some type of flatfish, resembling a sole, about 1 foot long and 6 inches across" lying on the seabed. The report has since been questioned, with suggestions that it may have been a sea cucumber. The video camera on board the Kaiko probe spotted a sea cucumber, a scale worm and a shrimp at the bottom. At the bottom of the Challenger deep, the Nereus probe spotted one polychaete worm about an inch long.

An analysis of the sediment samples collected by Kaiko found large numbers of simple organisms at 10,900 m (35,800 ft).

The overwhelming majority of the organisms collected were simple, soft-shelled foraminifera (432 species according to National Geographic).

Eighty-five percent of the specimens were organic, soft-shelled forams. This is unusual compared to samples of sediment from other deep-sea environments, where the percentage of organic-walled foraminifera ranges from 5% to 20%. As small organisms with hard, calcareous shells have trouble growing at extreme depths because of the high solubility of calcium carbonate in the pressurized water, scientists theorize that the preponderance of soft-shelled organisms in the Challenger Deep may have resulted from survivors of the biosphere present when the Challenger Deep was shallower than it is now.

The trench is one of the results of a large boundary where two oceanic tectonic plates have converged (collided).

At the boundary, the western edge of the Pacific Plate is subducted beneath the small Mariana Plate. Because the Pacific plate is the largest of all the tectonic plates on Earth, crustal material at its western edge has had up to 170 million years to compact and become very dense; hence its great height-difference relative to the higher-riding Mariana Plate, at the point where the Pacific Plate crust is subducted. This deep area is the Mariana trench proper. The movement of these plates is also responsible for the formation of the Mariana Islands.

All content from Kiddle encyclopedia articles (including the article images and facts) can be freely used under Attribution-ShareAlike license, unless stated otherwise. Cite this article:
Mariana Trench Facts for Kids. Kiddle Encyclopedia.