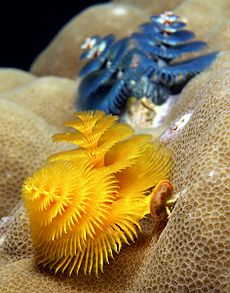 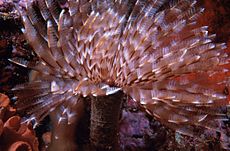 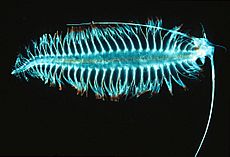 Polychaetes, or bristle worms, are a class of annelid worms.

They are generally found in a marine environment. There are more than 10,000 known species in this class. They are ancient animals, dating back to 518 million years ago. They are first found in the early Cambrian fossil beds of Sirius Passet in Greenland.

Each of their body segments has some fleshy protrusions that stand out. These 'parapodia' have many bristles, which are made of chitin. This is different from the Oligochaeta, which are similar in form, but only have a few bristles.

Common species are the lugworm, and the clam worm Nereis (which is sometimes also called a 'sandworm').

Polychaetes are segmented worms, generally less than 10 centimetres (3.9 in) in length, although ranging at the extremes from 1 millimetre (0.039 in) to 3 metres (9.8 ft). They are often brightly coloured, and may be iridescent or even luminescent.

Each segment bears a pair of paddle-like parapodia, which are used for movement. In many species, the parapodia, well supplied with blood vessels, act as the worm's primary respiratory surfaces. Bundles of bristles stick out from the parapodia.

Some bristle worms have poison bristles. The bristles will break off in the skin of a predator that tries to pick up the animal and sting the predator painfully.

The head, or prostomium, is relatively well developed, compared with other annelids. It is forward over the mouth, which lies on the animal's underside. The head normally includes two to four pair of eyes, although there are some blind species. These eyes are fairly simple structures, capable of distinguishing between light and dark. Some species have large eyes with lenses that may be capable of real vision.

The head also includes a pair of antennae, tentacle-like palps, and a pair of pits lined with cilia, known as "nuchal organs". These latter appear to be chemoreceptors which help the worm seek out food.

Polychaetes are vary in form and lifestyle. Most burrow or build tubes in the sediment, some swim among the plankton, and some live as commensals. A few are parasitic.

The mobile forms tend to have well-developed sense organs and jaws, while the stationary forms lack them, but may have specialized gills or tentacles used for respiration and deposit or filter feeding, e.g., fanworms.

A few groups have evolved to live in terrestrial environments, but are restricted to humid areas. Some have even evolved tubes that open inwards from the skin which work like simple lungs, absorbing oxygen from the air and allowing release of waste gases.

Most bristle worms are scavengers, but some are good predators, eating fishes and coral. Others like to eat algae. They are usually found hiding in reefs and rocky places. They crawl along the sea floor or the bottom of a tide pool, looking for something to eat.

All content from Kiddle encyclopedia articles (including the article images and facts) can be freely used under Attribution-ShareAlike license, unless stated otherwise. Cite this article:
Polychaete Facts for Kids. Kiddle Encyclopedia.