The lugworm, or sandworm, is a large worm of the phylum Annelida. Lugworms make the coiled tubes of sand that are a familiar sight on a beach at low tide but the lugworm itself is not seen except by people who dig them up from curiosity or to use as fishing bait.

The lugworm can grow to a size of about 9 inches (22 cm). Its body is segmented, like that of an earthworm. It has bristles in the middle of its body. It is a polychaete. It also has well-developed blood-vessels, and gills to breathe in the water.

Life in a burrow

A lugworm lives in a U-shaped burrow in sand. The U is made of an L-shaped gallery lined with mucus, from the toe of which a vertical unlined shaft runs up to the surface. This is a head shaft. At the surface the head shaft is marked by a small saucer-shaped depression. The tail shaft, 2 to 3 in (5.1 to 7.6 cm) from it, is marked by a highly coiled cast of sand. The lugworm lies in this burrow with its head at the base of the head shaft, swallowing sand from time to time. This makes the columns of sand drop slightly, so there is a periodic sinking of the sand in the saucer-shaped depression. When it first digs its burrow the lugworm softens the sand in its head shaft by pushing its head up into it with a piston action. After that the sand is kept loose by a current of water driven through the burrow from the hind end by the waves of contraction passing along the worm's body. It weighs 2 to 5 oz (57 to 142 g). Lugworms also have hairs on the outside of their bodies that act as external gills. These can rapidly increase its uptake of oxygen. 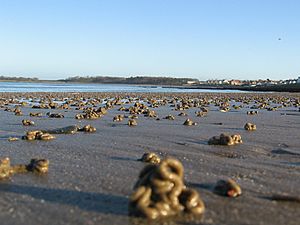 Lugworms are not typically visible, but the casts produced by their burrowing make distinctive patterns in damp sand

Once it burrows into the sand a lugworm seldom leaves it. It can stay there for weeks on end, sometimes changing its position slightly in the sand. But it may leave the burrow completely and re-enter the sand, making a fresh burrow for breeding but for 2 days in early October there is a genital crisis. This is when all the lugworms liberate their ova and sperms into the water above, and there the ova are fertilized. The ova are enclosed in tongue-shaped masses of jelly about 8 inches long, 3 inches wide and 1 inch thick. Each mass is anchored at one end. The larvae hatching from the eggs feed on the jelly and eventually break out when they have grown to a dozen segments and are beginning to look like their parents. They burrow into the sand, usually higher up the beach than the adults, and gradually move down the beach as they get older.

All content from Kiddle encyclopedia articles (including the article images and facts) can be freely used under Attribution-ShareAlike license, unless stated otherwise. Cite this article:
Lugworm Facts for Kids. Kiddle Encyclopedia.