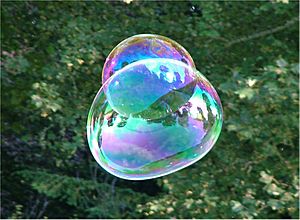 Iridescence is a physical property of some surfaces. Their colour appears to change as the angle of view or illumination changes.

Examples of natural iridescence are common. It can be seen in soap bubbles, butterfly wings and sea shells, and certain minerals. These are structural colours caused by microstructures which interfere with light.

The physical process which causes iridescence is usually interference.

All content from Kiddle encyclopedia articles (including the article images and facts) can be freely used under Attribution-ShareAlike license, unless stated otherwise. Cite this article:
Iridescence Facts for Kids. Kiddle Encyclopedia.