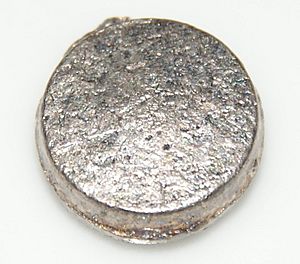 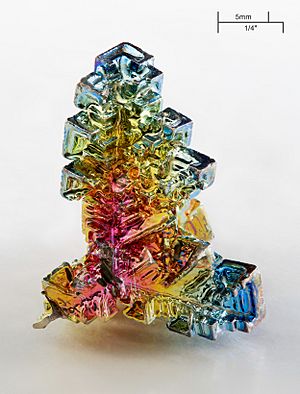 Bismuth crystals can have a thin layer of bismuth(III) oxide on the outside that is very colorful.

Bismuth is a silver metal with a pink tinge to it. This pink color is because of its oxide coating. Bismuth is a post-transition metal. It is one of the strongest diamagnetic metals. It is almost as heavy as lead. Its melting point is quite low 271.5 °C (520.7 °F), which is normal for post-transition metals. It is quite brittle. It can make crystals with a shiny surface. As a liquid it is heavier than as a solid. Another chemical that does this is water. It does not conduct electricity or heat very well.

+3 compounds are weak oxidizing agents except for bismuthine. They are normally pale yellow.

Bismuth(V) oxides (+5 compounds) are very strong oxidizing agents. Its chemical formula is Bi2O5. It is a scarlet red solid. It decomposes to bismuth(III) oxide and oxygen easily. It is made by electrolysis of bismuth(III) oxide in a hot concentrated alkali like sodium hydroxide.

Bismuth was known since ancient times. It was confused with tin and lead, though. No one is credited for discovering bismuth. In the 1500s, people started realizing that bismuth was different than tin or lead.

Bismuth is not very common in the earth. It is only about twice as common as gold. Bismite, a bismuth oxide mineral, and bismuthinite, a bismuth sulfide, are two common ores. Bismuth is sometimes found as a metal, too.

Bismuth and its minerals are too rare to be mined. They are gotten by "secondary extraction". It is normally found in lead metal. The lead metal is purified by electrolysis, leaving the bismuth behind as a sludge on the bottom of the container. The copper is taken out of the sludge and the bismuth is purified by being reduced in a furnace and all the impurities are filtered out.

Bismuth can also be recycled. This is difficult in many places because bismuth is used for things like bullets, solder, and stomach medicine that get scattered all over and cannot easily be gotten again.

Bismuth is used in alloys with very low melting points. Some of them melt in hot water. They are also found in solder that does not have lead in it. It can make alloys with other metals to make them more malleable. It is also used in bullets to replace lead. In some places lead bullets are outlawed as birds eat them and get lead poisoning. It is also used in alloys for plumbing. It is used in fishing sinkers.

Bismuth is used in some medicines such as Pepto-Bismol. This medicine has bismuth subsalicylate in it. It is also used as an internal deodorant and to treat eye infections and peptic ulcers.

Bismuth is much less toxic than other heavy metals. This is why it is replacing lead in many things. It does not add up in the body like other heavy metals do. A very large amount of bismuth can poison the kidneys and liver, though. Because its oxide does not dissolve in water, it is considered safe for the environment.

All content from Kiddle encyclopedia articles (including the article images and facts) can be freely used under Attribution-ShareAlike license, unless stated otherwise. Cite this article:
Bismuth Facts for Kids. Kiddle Encyclopedia.