Bohrium is a chemical element. At the periodic table of the elements it is at position 107. 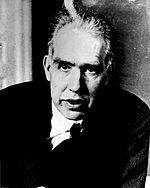 The element is named in honor of Niels Bohr.

Mendeleev predicted that Bohrium would exist. He called the element eka-rhenium because of its location was near Rhenium in the Periodic Table. The chemistry of bohrium is like the chemistry of rhenium.

All content from Kiddle encyclopedia articles (including the article images and facts) can be freely used under Attribution-ShareAlike license, unless stated otherwise. Cite this article:
Bohrium Facts for Kids. Kiddle Encyclopedia.