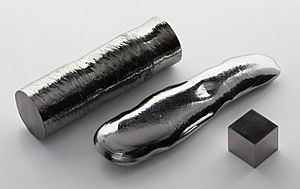 Rhenium is a chemical element. It has the chemical symbol Re. It has the atomic number 75. It is a rare metal. It is silver white. In chemistry it is placed in a group of metal elements called the transition metals. The chemistry of rhenium is similar to manganese. Discovered in 1908, rhenium was the second-last stable element to be discovered ('stable' meaning not radioactive). It was named after the river Rhine in Europe.

Nickel-based superalloys of rhenium are used in the combustion chambers, turbine blades, and exhaust nozzles of jet engines. These alloys contain up to 6% rhenium, making jet engine construction the largest single use for the element. The second-most important use is as a catalyst: rhenium is an excellent catalyst for hydrogenation and isomerization.

Rhenium found as a by-product of molybdenum refinement.

Rhenium is used in some manganese alloys. Rhenium-molybdenum alloys are superconductors.

Rhenium was discovered by Walter Noddack, Ida Noddack, and Otto Berg in Germany. In 1925, they reported that they detected the element in a platinum ore and in the mineral columbite. They also found rhenium in gadolinite and molybdenite. In 1928, they were able to remove 1 g of the element from 660 kg of molybdenite.

Rhenium is a silvery-white metal. It has the third highest melting points of all elements. It is also the third densest element.

Rhenium is one of the rarest elements in Earth's crust. It the 77th most abundant element in the Earth's crust. Rhenium may not be found free in nature. It is found in small amounts in the mineral molybdenite.

Commercial rhenium is gotten from molybdenum roaster-flue gas. Some molybdenum ores contain 0.001% to 0.2% rhenium. Rhenium metal is made by reducing ammonium perrhenate with hydrogen at high temperatures.

All content from Kiddle encyclopedia articles (including the article images and facts) can be freely used under Attribution-ShareAlike license, unless stated otherwise. Cite this article:
Rhenium Facts for Kids. Kiddle Encyclopedia.