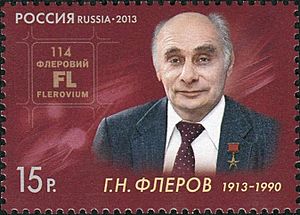 Stamp of Russia, issued in 2013, dedicated to Georgy Flyorov and flerovium

Flerovium does not exist in nature. It has to be made. It is a synthetic element. It is made from a nuclear reaction between plutonium and calcium. The reaction that happens is a fusion reaction.

The discovery of Flerovium in December 1998 was reported in January 1999 by scientists at the Joint Institute for Nuclear Research in Dubna, Russia. The same team of scientists made another isotope of Uuq three months later and made it again in 2004 and 2006.

In 2004 in the Joint Institute for Nuclear Research checked it was made by another method. They found the final products of radioactive decay.

After its discovery, the "new" element was named Ununquadium. The named changed on May 30th, 2012 to "Flerovium". The International Union of Pure and Applied Chemistry named it so.

Not enough Flerovium has been made to measure its physical or chemical properties. It is thought that it would be a soft, dense metal that changes colour in air. It may have a low melting point of about 200 °C.

Flerovium can be made by bombarding a plutonium-244 target with calcium-48 as a beam of ions.

All content from Kiddle encyclopedia articles (including the article images and facts) can be freely used under Attribution-ShareAlike license, unless stated otherwise. Cite this article:
Flerovium Facts for Kids. Kiddle Encyclopedia.