A bombardment is an attack by artillery weapons against fortifications, troops or towns and buildings. It word came from the name of the medieval artillery weapon, the bombard, which was used to fire heavy stones during a siege.

Before World War I the word bombardment was only used for the attack of defenceless or undefended objects, houses, public buildings. Since then it has come to mean any mass attack delivered by artillery or short range missiles, and also as aerial bombardment if delivered by bomber aircraft or long range missiles.

It now is also used to describe activities in science, such as firing high energy particles like electrons into atoms in the study of nuclear reactions. The word can also be used informally, for example, a person could be "bombarded" with questions.

In its old strict sense the term was only applied to the bombardment of defenceless or undefended objects, houses, public buildings. The purpose is to destroy the courage of your enemies. Civilians in a besieged town would put pressure on their military leaders to surrender before the place was destroyed. The practice of using artillery to do this was especially common up until World War I. Since then long range artillery bombardment has been joined by aerial bombardment delivered by aircraft and missiles. 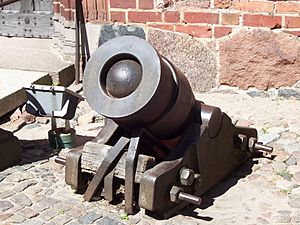 All content from Kiddle encyclopedia articles (including the article images and facts) can be freely used under Attribution-ShareAlike license, unless stated otherwise. Cite this article:
Bombardment Facts for Kids. Kiddle Encyclopedia.