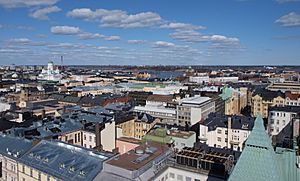 Helsinki is in the south of Finland, on the coast of the Gulf of Finland. City is in the Uusimaa region. When one looks from Helsinki, Tallinn is on the opposite side of the sea, but it is too far away to see. A poetic name for Helsinki is "the daughter of the Baltic Sea".

In 1550, Swedish king Gustav Vasa commanded people to build a new city and move there. His idea was to build a new place to trade, which would be more popular than Tallinn. The idea did not work well, and many people returned from Helsinki to their homes. Later Sweden built the fortress Suomenlinna in Helsinki. After Russia had taken Finland from Sweden in several wars, they started developing Helsinki. Helsinki became the capital of autonomous province of Finland. When Finland became independent in 1917, Helsinki stayed as the capital city. 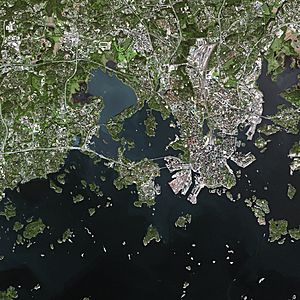 Parts of Helsinki and Espoo seen from the SPOT satellite

Called the "Daughter of the Baltic", Helsinki is on the tip of a peninsula and on 315 islands. The inner city is located on a southern peninsula, Helsinginniemi (”Helsinki’s peninsula”), which is rarely referred to by its actual name, Vironniemi (”Estonia’s peninsula”).

Population density in certain parts of Helsinki's inner city area is very high, reaching 16,494 inhabitants per square kilometre (42,720/sq mi) in the district of Kallio, but as a whole Helsinki's population density of 3,050 per square kilometre (7,900/sq mi) ranks the city as rather sparsely populated in comparison to other European capital cities.

The City of Helsinki has about 11,000 boat berths and possesses over 14,000 hectares of marine fishing waters adjacent to the Capital Region. Some 60 fish species are found in this area and recreational fishing is popular.

Major islands in Helsinki include Seurasaari, Vallisaari, Lauttasaari, and Korkeasaari – the lattermost being the site of Finland’s largest zoo. Other noteworthy islands are the fortress island of Suomenlinna (Sveaborg), the military island of Santahamina, and Isosaari. Pihlajasaari island is a favorite summer spot for gay men and naturists, comparable to Fire Island in New York City. 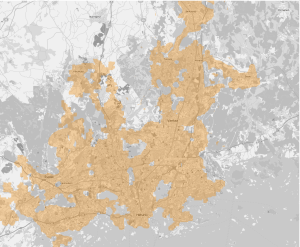 The Helsinki metropolitan area, also known as the Capital Region (Finnish: Pääkaupunkiseutu, Swedish: Huvudstadsregionen) comprises four municipalities: Helsinki, Espoo, Vantaa, and Kauniainen. The Helsinki urban area is considered to be the only metropolis in Finland. It has a population of over 1,1 million, and is the most densely populated area of Finland. The Capital Region spreads over a land area of 770 square kilometres (300 sq mi) and has a population density of 1,418 inhabitants per square kilometre (3,670/sq mi). With over 20 percent of the country's population in just 0.2 percent of its surface area, the area's housing density is high by Finnish standards.

The Helsinki urban area is an officially recognized urban area in Finland, defined by its population density. The area stretches throughout 11 municipalities, and is the largest such area in Finland, with a land area of 66,931 square kilometres (25,842 sq mi) and approximately 1,2 million inhabitants.

Helsinki has a humid continental climate (Dfb). Owing to the mitigating influence of the Baltic Sea and North Atlantic Current (see also Extratropical cyclone), temperatures during the winter are higher than the northern location might suggest, with the average in January and February around −5 °C (23 °F).

Winters in Helsinki are notably warmer than in the north of Finland, and the snow season is much shorter in the capital. Temperatures below −20 °C (−4 °F) occur at most a few times a year. However, because of the latitude, days last 5 hours and 48 minutes around the winter solstice with very low Sun (at noon, the Sun is a little bit over 6 degrees in the sky), and the cloudy weather at this time of year exacerbates darkness. Conversely, Helsinki enjoys long daylight during the summer; during the summer solstice, days last 18 hours and 57 minutes.

The average maximum temperature from June to August is around 19 to 22 °C (66 to 72 °F). Due to the marine effect, especially during hot summer days, daily temperatures are a little cooler and night temperatures higher than further inland. 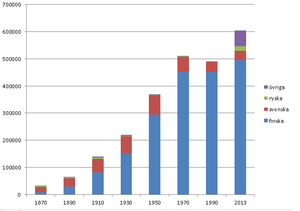 The population broken down by language group, 1870–2013. During the period, the population increased significantly, and the city changed its linguistic majority from Swedish to Finnish.
Finnish speakers
Swedish speakers
Russian speakers
Speakers of other languages

Finnish and Swedish are the official languages of Helsinki. 81.9% of the citizens speak Finnish as their native language. 5.9% speak Swedish. The remaining 12.2% of the population speaks a native language other than Finnish or Swedish.

Helsinki slang is a regional dialect of the city. It combines influences mainly from Finnish and English, and has traditionally had strong Russian and Swedish influences. Finnish today is the common language of communication between Finnish speakers, Swedish speakers, and speakers of other languages (New Finns) in day-to-day affairs in the public sphere between unknown persons. In instances where a speaker's knowledge of Finnish is not known, English is usually spoken. Swedish is commonly spoken in city or national agencies specifically aimed at Finland-Swedish speakers, such as the Social Services Department on Hämeentie or the Luckan Cultural centre in Kamppi. Knowledge of Finnish is also essential in business and is usually a basic requirement in the employment market.

Finnish speakers surpassed Swedish speakers in 1890 to become the majority of the city's population. At the time, the population of Helsinki was 61,530. 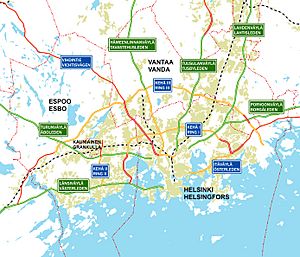 The backbone of Helsinki's motorway network consists of three semicircular beltways, Ring I, Ring II, and Ring III, which connect expressways heading to other parts of Finland, and the western and eastern arteries of Länsiväylä and Itäväylä respectively.

The Helsinki Central Railway Station is the main terminus of the rail network in Finland. Two rail corridors lead out of Helsinki, the Main Line to the north (to Tampere, Oulu, Rovaniemi), and the Coastal Line to the west (to Turku). The railway connection to the east branches from the Main Line outside of Helsinki at Kerava, and leads via Lahti to eastern parts of Finland and to Russia. 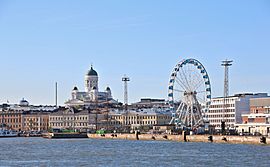 Like many other cities, Helsinki was deliberately founded at a location on the sea in order to take advantage of shipping. The freezing of the sea imposed limitations on sea traffic up to the end of the 19th century.

But for the last hundred years, the routes leading to Helsinki have been kept open even in winter with the aid of icebreakers, many of them built in the Helsinki Hietalahti shipyard. The arrival and departure of ships has also been a part of everyday life in Helsinki. 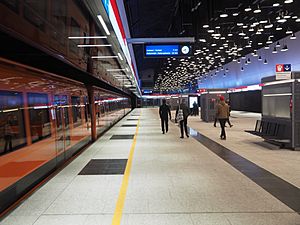 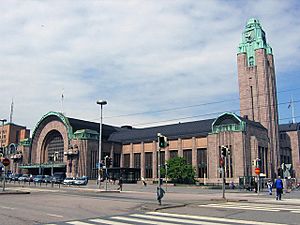 Helsinki's tram system has been in operation with electric drive continuously since 1900. 13 routes that cover the inner part of the city are operated. As of 2017, the city is expanding the tram network, with several major tram line construction projects under way. These include the 550 trunk line (Raide-Jokeri), roughly along Ring I around the city center, and a new tramway to the island of Laajasalo.

The Helsinki Metro, opened in 1982, is the only metro system in Finland, albeit the Helsinki commuter rail trains operate at metro-like frequencies.

All content from Kiddle encyclopedia articles (including the article images and facts) can be freely used under Attribution-ShareAlike license, unless stated otherwise. Cite this article:
Helsinki Facts for Kids. Kiddle Encyclopedia.