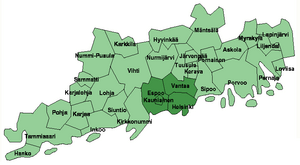 Location, near Helsinki and Vantaa

Espoo (Swedish: Esbo) is the second largest city in Uusimaa, Finland. As of January 2014, more than 260,000 people lived in Espoo. Other municipalities near to it are Kauniainen, Vantaa, Kirkkonummi, Nurmijärvi, Vihti and the capital Helsinki.

All content from Kiddle encyclopedia articles (including the article images and facts) can be freely used under Attribution-ShareAlike license, unless stated otherwise. Cite this article:
Espoo Facts for Kids. Kiddle Encyclopedia.