The whooper swan (Cygnus cygnus), is a large white bird which lives in Europe and Asia. It is the Eurasian counterpart of the North American trumpeter swan. Francis Willughby and John Ray's Ornithology of 1676 referred to the this swan as "the Elk, Hooper, or wild Swan". 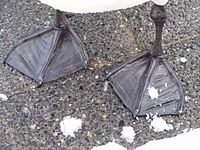 Legs and feet are black. 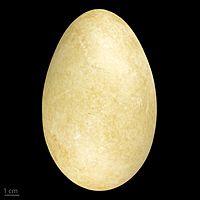 An adult whooper swan weighs 9-11 kg. It is 140-160 cm long (including neck and head) and it has a wingspan of 205-235 cm. Young swans are grey-brown. They have a pink and black beak. The young get pale grey in end of their first summer. They get the white adult colour before their second winter. Male and female swans look otherwise similar, but the males are larger.

The whooper swan, Bewick's swan and mute swan look quite similar, but the details are different. Whooper swan is clearly larger than Bewick's swan. When it lands it water or takes off it slides longer distances.

The nest is a large pile of plant matter built on dry ground or on small islands near lakeshore. The same nest mound may be used over many years although it is often repaired and new material is added.

Whooper swans spends their summer in Northern Europe and Asia. For winter they migrate to coasts where sea does not freeze.

All content from Kiddle encyclopedia articles (including the article images and facts) can be freely used under Attribution-ShareAlike license, unless stated otherwise. Cite this article:
Whooper swan Facts for Kids. Kiddle Encyclopedia.