A swan (Cygnini) is a kind of water bird, from the genera Cygnus and Coscoroba. They are in the subfamily Anserinae, in the family Anatidae, which also includes geese and ducks.

Many swans live in colder places, such as northern Europe, Asia and North America. They live on water. They swim on top of the water and eat plants off the bottom of ponds, lakes, or oceans. They also eat insects and other small animals. Swans can also fly.

A baby swan is called a cygnet.

Mute swan landing on water. Due to the size and weight of most swans, large areas of open land or water are required to successfully take off and land.

Swans are the largest extant members of the waterfowl family Anatidae, and are among the largest flying birds. The largest species, including the mute swan, trumpeter swan, and whooper swan, can reach a length of over 1.5 m (59 in) and weigh over 15 kg (33 lb). Their wingspans can be over 3.1 m (10 ft). Compared to the closely related geese, they are much larger and have proportionally larger feet and necks. Quite unusual for birds, swans have "teeth" - jagged parts of their bill that are used for catching and eating fish. Adults also have a patch of unfeathered skin between the eyes and bill. The sexes are alike in plumage, but males are generally bigger and heavier than females.

Swans' legs are normally a dark blackish grey colour, except for the two South American species, which have pink legs. Bill colour varies: the four subarctic species have black bills with varying amounts of yellow, and all the others are patterned red and black. Although birds do not have teeth, swans have beaks with serrated edges that look like small jagged 'teeth' as part of their beaks used for catching and eating aquatic plants and algae, but also molluscs, small fish, frogs, and worms. The mute swan and black-necked swan have lumps at the base of their bills on the upper mandible. 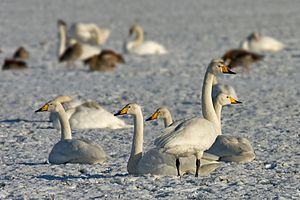 Swans are generally found in temperate environments, rarely occurring in the tropics. A group of swans is called a bevy or a wedge in flight. Four (or five) species occur in the Northern Hemisphere, one species is found in Australia, one extinct species was found in New Zealand and the Chatham Islands, and one species is distributed in southern South America. They are absent from tropical Asia, Central America, northern South America and the entirety of Africa. One species, the mute swan, has been introduced to North America, Australia and New Zealand.

Several species are migratory, either wholly or partly so. The mute swan is a partial migrant, being resident over areas of Western Europe but wholly migratory in Eastern Europe and Asia. The whooper swan and tundra swan are wholly migratory, and the trumpeter swans are almost entirely migratory. There is some evidence that the black-necked swan is migratory over part of its range, but detailed studies have not established whether these movements are long or short range migration. 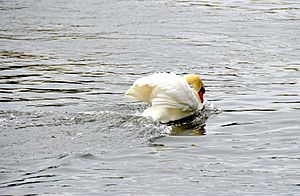 Swans feed in water and on land. They are almost entirely herbivorous, although they may eat small amounts of aquatic animals. In the water, food is obtained by up-ending or dabbling, and their diet is composed of the roots, tubers, stems and leaves of aquatic and submerged plants. 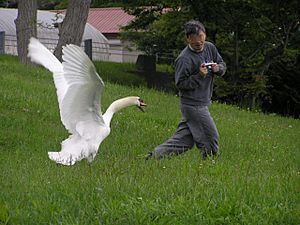 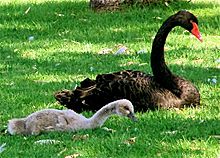 Swans famously mate for life, and typically bond even before they reach sexual maturity. Trumpeter swans, for example, who can live as long as 24 years and only start breeding at the age of 4–7, form monogamous pair bonds as early as 20 months. "Divorce", though rare, does occur; one study of mute swans showing a 3% rate for pairs that breed successfully and 9% for pairs that don't. The pair bonds are maintained year-round, even in gregarious and migratory species like the tundra swan, which congregate in large flocks in the wintering grounds. Swan's nests are on the ground near water and about a metre across. Unlike many other ducks and geese, the male helps with the nest construction, and also take turns incubating the eggs, and alongside the whistling ducks are the only anatids that will do this. Average egg size (for the mute swan) is 113×74 mm, weighing 340 g, in a clutch size of 4 to 7, and an incubation period of 34–45 days. Swans are highly protective of their nests. They will viciously attack anything that they perceive as a threat to their chicks, including humans.

See also: The Swan of Tuonela

Many of the cultural aspects refer to the mute swan of Europe. Perhaps the best known story about a swan is "The Ugly Duckling" fable. Swans are often a symbol of love or fidelity because of their long-lasting, apparently monogamous relationships. See the famous swan-related operas Lohengrin and Parsifal.

Swan meat was regarded as a luxury food in England in the reign of Elizabeth I. A recipe for baked swan survives from that time: "To bake a Swan Scald it and take out the bones, and parboil it, then season it very well with Pepper, Salt and Ginger, then lard it, and put it in a deep Coffin of Rye Paste with store of Butter, close it and bake it very well, and when it is baked, fill up the Vent-hole with melted Butter, and so keep it; serve it in as you do the Beef-Pie." 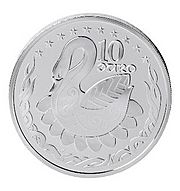 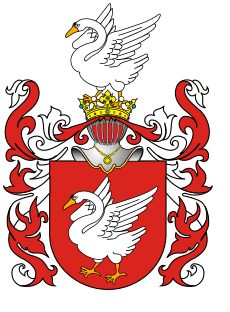 "Łabędź" (Polish for "Swan") is a Polish–Lithuanian coat of arms which was used by many Polish szlachta and Lithuanian Bajorai (noble) families under the Polish–Lithuanian Commonwealth. The variant here given is the coat-of-arms of writer Henryk Sienkiewicz's family.

The Irish legend of the Children of Lir is about a stepmother transforming her children into swans for 900 years. In the legend The Wooing of Etain, the king of the Sidhe (subterranean-dwelling, supernatural beings) transforms himself and the most beautiful woman in Ireland, Etain, into swans to escape from the king of Ireland and Ireland's armies. The swan has recently been depicted on an Irish commemorative coin. 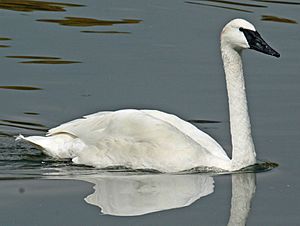 Swans are also present in Irish literature in the poetry of W.B. Yeats. "The Wild Swans at Coole" has a heavy focus on the mesmerising characteristics of the swan. Yeats also recounts the myth of Leda and the Swan in the poem of the same name.

In Norse mythology, there are two swans that drink from the sacred Well of Urd in the realm of Asgard, home of the gods. According to the Prose Edda, the water of this well is so pure and holy that all things that touch it turn white, including this original pair of swans and all others descended from them. The poem Volundarkvida, or the Lay of Volund, part of the Poetic Edda, also features swan maidens.

In the Finnish epic Kalevala, a swan lives in the Tuoni river located in Tuonela, the underworld realm of the dead. According to the story, whoever killed a swan would perish as well. Jean Sibelius composed the Lemminkäinen Suite based on Kalevala, with the second piece entitled Swan of Tuonela (Tuonelan joutsen). Today, five flying swans are the symbol of the Nordic Countries, the whooper swan (Cygnus cygnus) is the national bird of Finland, and the mute swan is the national bird of Denmark.

The ballet Swan Lake is among the most canonic of classical ballets. Based on the 1875–76 score by Pyotr Ilyich Tchaikovsky, the most promulgated choreographic version was created by Marius Petipa and Lev Ivanov (1895), the premiere of which was danced by the Imperial Ballet at the Mariinsky Theater in St. Petersburg. The ballet's lead dual roles of Odette (white swan) / Odile (black swan) represent good and evil, and are among the most challenging roles created in Romantic classical ballet. The ballet is in the repertories of ballet companies around the world.

French satirist François Rabelais wrote in Gargantua and Pantagruel that a swan's neck was the best toilet paper he had encountered.

St Hugh of Lincoln with swan

A swan is one of the attributes of St Hugh of Lincoln based on the story of a swan who was devoted to him.

In Latin American literature, the Nicaraguan poet Rubén Darío (1867–1916) consecrated the swan as a symbol of artistic inspiration by drawing attention to the constancy of swan imagery in Western culture. Darío's most famous poem in this regard is Blasón – "Coat of Arms" (1896), and his use of the swan made it a symbol for the Modernismo poetic movement that dominated Spanish language poetry from the 1880s until the First World War. Such was the dominance of Modernismo in Spanish language poetry that the Mexican poet Enrique González Martínez attempted to announce the end of Modernismo with a sonnet provocatively entitled, Tuércele el cuello al cisne – "Wring the Swan's Neck" (1910).

Swans are revered in Hinduism, and are compared to saintly persons whose chief characteristic is to be in the world without getting attached to it, just as a swan's feather does not get wet although it is in water. The Sanskrit word for swan is hamsa and the "Raja Hamsam" or the Royal Swan is the vehicle of Goddess Saraswati which symbolises the "Sattva Guna" or purity par excellence. The swan if offered a mixture of milk and water, is said to be able to drink the milk alone. Therefore, Goddess Saraswati the goddess of knowledge is seen riding the swan because the swan thus symbolizes "Viveka" i.e. prudence and discrimination between the good and the bad or between the eternal and the transient. This is taken as great quality, as shown by this Sanskrit verse:

It is mentioned several times in the Vedic literature, and persons who have attained great spiritual capabilities are sometimes called Paramahamsa ("Supreme Swan") on account of their spiritual grace and ability to travel between various spiritual worlds. In the Vedas, swans are said to reside in the summer on Lake Manasarovar and migrate to Indian lakes for the winter. They're believed to possess some powers such as the ability to eat pearls.

The Black Swan theory originates from the erroneous presumption in Ancient Rome that black swans didn't exist, leading to the black swan as a metaphor for something that could, in theory exist, but doesn't. After the "discovery" of actual black swans, this became a metaphor or analogy for something, typically an unexpected event or outlier, that has an unforeseen significance.

All content from Kiddle encyclopedia articles (including the article images and facts) can be freely used under Attribution-ShareAlike license, unless stated otherwise. Cite this article:
Swan Facts for Kids. Kiddle Encyclopedia.