Swan Lake is a romantic ballet in four acts. Pyotr Ilyich Tchaikovsky wrote the music. In 1871 he wrote a little ballet about swans for his nieces and nephews. He used some of the music from this ballet for Swan Lake. The story of the ballet is based on a German fairy tale. This tale was probably tweaked by Tchaikovsky and his friends during the ballet's early discussion stages.

Swan Lake is about a prince named Siegfried. He falls in love with the Swan princess, Odette. She is a swan by day, but a young woman at night. She is under a magic spell that can only be broken by a man who will make a promise to love her for all time. Siegfried makes the promise. He is tricked though by the magician who cast the spell. The ballet ends with the deaths of Siegfried and Odette.

The ballet was first performed on 4 March 1877 at the Bolshoi Theatre in Moscow, Russia. Critics looked upon it as a failure for many reasons. In 1895 some changes were made to the ballet. It was then performed at the Mariinsky Theatre in St. Petersburg, Russia. This time the critics thought Swan Lake a great success. Most performances today are based on this 1895 version.

Act 1: 1. Scène—The curtain rises on Prince Siegfried's birthday party. He is 21. On the next evening a grand ball will be held. He is to select a bride from six visiting princesses. Wolfgang, his tutor, introduces a band of peasants to the merrymakers. 2. Valse. 3. Scène. The Queen Mother enters. She thinks Siegfried is frivolous. The Queen Mother leaves. Benno encourages the Prince to continue the fun. 4. Pas de trois.—Dances for the peasants. 5. Pas de deux.—Dances for the merrymakers. 6. Pas d'action.—Wolfgang is drunk and collapses. 7. Sujet.—The sun sets. Siegfried suggests a final dance. 8. Danses des couppes.—The merrymakers dance a polonaise holding their goblets. 9. Finale.—A flock of swans flies overhead. Benno suggests a hunt. The Prince agrees. They set off.

Act 2: 10. Scène.—A lake shimmering in the moonlight is seen. Siegfried and his friends watch a flock of swans glide across the lake's surface. 11. Scène.—The hunters take aim. The birds are transformed into maidens. Their leader asks Siegfried why he troubles them. She says that she is the Princess Odette. She and her companions have all been changed into swans by her wicked stepmother. They are watched by her stepmother's companion Von Rothbart in the guise of an owl. Only a marriage vow can break the spell that keeps her a swan by day and a maiden by night. 12. Scène.—Siegfried says he loves Odette. She promises to attend tomorrow's ball. She warns him that her stepmother is very dangerous. 13. Danses des cygnes. 14 Scène.— Dawn breaks. Odette and her friends return to the lake as swans.

Act 3: Guests arrive in Siegfried's castle for the selection of the Prince's bride. 16. Danse du corps de ballet and des nains.—All dance, including a group of dwarves. 17. Scène.—La sortie des invités et la Valse. The six princesses arrive. 18. Scène. Siegfried does not choose a bride from among the six princesses. Von Rothbart enters with his daughter Odile. She is disguised as Odette. 19. Pas de six. The princesses dance. 20. Danse hongroise. 21. Danse espangnole. 22. Danse napolitaine. 23. Danse Mazurka. 24. Scène.—Siegfried chooses Odile as his bride, believing she is Odette. Von Rothbart flees the hall as an owl. Siegfried rushes into the night to find Odette.

Act 4: 25. Entr'acte. 26. Scène.—Odette's friends await her return to the lake. 27. Danse des petits cygnes. 28. Scène. Odette collapses into her companions' arms. She tells them what has happened. A storm rises. Siegfried reaches Odette. 29. Scène finale.—He begs her to forgive him. She dies of grief in his arms. He throws her crown upon the waters. The waves overwhelm him. The swans are seen gliding away across the lake.

In 1871 Tchaikovsky was passing the summer in the Ukraine with his sister Alexandra Davydova. It was in her home at Kamenka that he wrote a short ballet about swans for her children to perform. The story of the ballet was based on "The Lake of Swans", a German fairy tale. Tchaikovsky used a musical theme from this children's ballet in the mature Swan Lake. Little else is known of this ballet for children.

In 1875 Vladimir Begitchev asked Tchaikovsky to write a ballet about swans. Begitchev was the official in charge of the repertory of the Imperial Theatres. Tchaikovsky accepted his invitation to write the ballet. He told Rimsky-Korsakov, "I accepted the work, partly because I want the money, but also because I have long had the wish to try my hand at this kind of music." In August he had completed sketches for two acts. He finished the ballet on 10 April 1876.

It is uncertain who wrote the libretto of the ballet. Both Begitchev and the dancer Vasily Geltzer were credited in the programme. They likely based it upon discussions with the artists who met at Begitchev's salon. They also used tales from Johann Musäus's Volksmärchen der Deutschen (1782–86), a collection of German fairy and folk tales.

Tchaikovsky had no experience writing ballet music for the professional theatre when he accepted Begitchev's invitation. In 1875 he began work on Swan Lake. It was his first ballet. He studied the ballet music of other writers. He liked the music and ballets of Leo Delibes. Tchaikovsky thought Delibes's music was pretty and tuneful. Tchaikovsky however would base Swan Lake on a symphonic scale. Writing the music for Swan Lake was a way for Tchaikovsky to avoid the reality of being a homosexual in czarist Russia. Russia was a repressive state. Homosexuals were sent to prison, exiled, or banished. Symphonies did not ease the stress in the way ballet music did; he had to put too much of his inner life into symphonies. He was hired to write Swan Lake in May 1875. He completed the music in April 1876. The official responsible for the music at the Bolshoi Theatre thought Tchaikovsky's music impossible to understand. A leitmotif in Tchaikovsky's little ballet music for his nieces and nephews came to be called the "Song of the Swans". Tchaikovsky used this leitmotif in Swan Lake.

Characters in the ballet 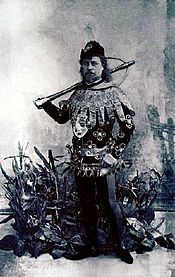 Pavel Gerdt as Prince Siegfried in the 1895 St. Petersburg revival

Structure of the ballet

Pierina Legnani as Odette in the St. Petersburg revival, 1895 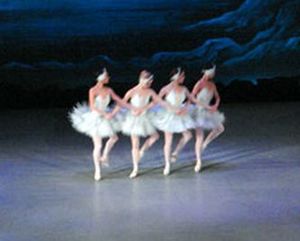 "Dance of the Baby Swans" from Act 4

John Warrack points out that Tchaikovsky put the drama in the story into music: "By making B the key of the tragedy, he initiates a musical "plot" with the dark forces of Rothbart tending to drag the tonality down into flatter keys. The main action, on the other hand, lies on the key area of A." Tchaikovsky balanced all the musical components of the work. "The divertissements are in his lightest, most appealing musical manner", Warrack writes, "The dances that further the plot have rather greater musical substance, while the scenes of narrative and action are in what was found his "symphonic" manner." Critics said Tchaikovsky's music was "too noisy, too 'Wagnerian' and too symphonic".

Rehearsals for Swan Lake began before Tchaikovsky finished the score, and took place over 11 months. Everyone involved in the production had never heard such a complex score for a ballet. They described the music as "undanceable". Even the conductor threw his hands up in despair over the music.

The choreographer Julius Reisinger was incompetent, and the sets lacked a cohesiveness because they were designed by three different men. In addition, the Bolshoi Theatre was suffering at the time from problems including the lack of a ballet master who could develop a production based on the score. The role of Odette was not given to a first rate dancer but instead to a second rate talent. The reason may have been political.

Swan Lake was first performed on 4 March 1877 at the Bolshoi Theatre in Moscow. Julius Reisinger designed the dances. Pauline Karpakova danced Odette. She put some numbers she liked from other ballets into Swan Lake. The ballet was a failure. In 1883 the Bolshoi dropped the ballet from its repertory. At that time, the sets were falling apart. It was not until 1901 that Alexander Gorsky staged a new production of Swan Lake for the Bolshoi.

What people thought about the ballet

The first performance of Swan Lake was a disaster. Herman Laroche wrote, "I must say that I had never seen a poorer presentation on the Bolshoi stage. The costumes, decor, and machines did not hide in the least the emptiness of the dances. Not a single balletomane got out of it even five minutes of pleasure." He praised the music. He wrote that Tchaikovsky was "in excellent humour ... he was fully at the height of his genius." Tchaikovsky's brother Modest wrote, "The poverty of the production, meaning the décor and costumes, the absence of outstanding performers, the Ballet Master's weakness of imagination, and, finally, the orchestra ... all of this together permitted [Tchaikovsky] with good reason to cast the blame for the failure on others." The ballet was a moderate success with theatre-goers however. It was presented 33 times between its première at the Bolshoi in 1877 and its final performance in 1883. 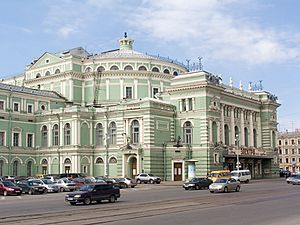 Riccardo Drigo was the conductor of the Mariinsky orchestra. He dropped some numbers from the ballet. He orchestrated three piano numbers from Tchaikovsky's Op. 72. He then put them in the ballet. These three numbers were "L'Espiègle", "Valse Bluette", and "Un poco di Chopin". He then put a number into Act 3 which he may have written himself.

Tchaikovsky's brother Modest changed the ballet's story a little for the revision. He gave the ballet a happy ending. The new Swan Lake was presented on 27 January 1895 at the Mariinsky. Pierina Legnani danced both Odette and Odile. The ballet was a great success. This version of the ballet is the one generally seen today.

Swan Lake is famous for the 32 fouettés en tournant in Act 3. These fouettés are danced at the end of the "Black Swan" pas de deux by the ballerina playing Odile. The pas was an afterthought of Tchaikovsky's. It was not included in the original production. It consists of the opening adagio followed by a variation for the male dancer. This is followed by a variation for the ballerina. The whole concludes with a brisk movement for both dancers that includes the fouettés. Pierina Legnani first danced the fouettés in the Mariinsky production of 1895. Ballet-goers were uncertain about the 32 fouettés. Some thought they were just a stunt. Others found them exciting. These ballet-goers went to every performance to count the number of turns.

Swan Lake became known in Europe and the United States not long after the revised version was presented at the Mariinsky Theatre in 1895. It was first presented in Europe at Prague in June 1907. It was first presented in the United States at the Metropolitan Opera House in December 1911. Diaghilev's Ballets Russes presented a two-act Swan Lake in London in 1911. The Ballets Russes presented a one-act version in London in 1925. The complete Swan Lake was first presented in England by the Sadler's Wells Ballet in November 1934. Ballerinas portraying Odette include Mathilde Kchessinska, Anna Pavlova, and Margot Fonteyn. Pavel Gerdt was the Prince Siegfried of the 1895 St. Petersburg production. Nijinsky and Rudolph Nureyev have also performed Prince Siegfried.

The score used in this comparison is Tchaikovsky's score. It may be different from Riccardo Drigo's score which is usually performed today. The titles for each number are taken from the original published score. Some of the numbers are titled simply as musical indications, those that are not are translated from their original French titles.

No. 5 Pas de deux for Two Merry-makers (this number was later fashioned into the Black Swan Pas de Deux)

All content from Kiddle encyclopedia articles (including the article images and facts) can be freely used under Attribution-ShareAlike license, unless stated otherwise. Cite this article:
Swan Lake Facts for Kids. Kiddle Encyclopedia.