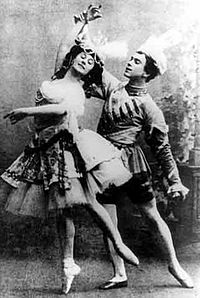 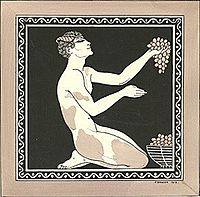 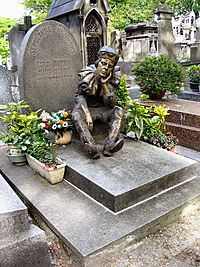 Tombstone of Vaslav Nijinsky in Cimetière de Montmartre in Paris. The statue, donated by Serge Lifar, shows Nijinsky as the puppet Petrouchka.

Vaslav Nijinsky (Kiev, Ukraine, 12 March 1890–London, England, 8 April 1950) was the most famous male ballet dancer of the early 20th century, and an important choreographer. He was born to Polish parents, both of whom were dancers.

Nijinsky was famous for his dancing ability, and of his ability to show the character of the part he was playing. He could dance en pointe, a rare skill among male dancers at the time. His ability to perform seemingly gravity-defying leaps was legendary. The ballerina and choreographer Bronislava Nijinska was his sister. They both danced for the Imperial Ballet at the Mariinsky Theatre, and later for the Ballets Russes of Serge Diaghilev.

In 1900 Nijinsky joined the Imperial Ballet School at St Petersburg, where he studied under great trainers such as Enrico Cecchetti. At 18 he was given a string of leads. In 1910, the company's prima ballerina assoluta Mathilde Kschessinska selected Nijinsky to dance in a revival of Marius Petipa's Le Talisman. Nijinsky created a sensation in the role of the Wind God Vayou.

His performance in The Sleeping Beauty (music by Tchaikovsky) was a tremendous success. In 1910 he performed in Giselle, and Fokine's ballets Carnaval and Scheherazade (based on the orchestral suite by Rimsky-Korsakov). His partnership with Tamara Karsavina, in the Mariinsky Theatre, was highly praised: they were called the "most exemplary artists of the time".

A turning point for Nijinsky was his meeting Sergei Diaghilev. Diaghilev was a celebrated entrepreneur (organiser) of ballet and art exhibitions, who promoted Russian visual and musical art abroad. From that moment on, Diaghilev directed and managed Nijinsky's career, and they became lovers.

In 1909 Diaghilev took a company of Russian opera and ballet stars to Paris, featuring Nijinsky and Anna Pavlova. The season of colourful Russian ballets and operas, works mostly new to the West, was a great success. It led Diaghilev to create his famous company Les Ballets Russes with choreographer Michel Fokine and designer Léon Bakst. The Paris seasons of the Ballets Russes were an artistic and social sensation; setting trends in art, dance, music and fashion for the next decade.

Nijinsky also choreographed ballets. They were avant-garde and controversial. His ballets were L'après-midi d'un faune (The Afternoon of a Faun, based on Claude Debussy's music) (1912), The Rite of Spring (1913), Jeux (1913) and Till Eulanspiegel (1916).

In The Rite of Spring (Le Sacre du Printemps), with music by Stravinsky (1913), Nijinsky created choreography which went beyond the limits of traditional ballet. For the first time, his audiences got a sight of modern dance. The angular movements expressed the heart of Stravinsky's radically modern score. The music and dance caused a riotous reaction at the Théâtre de Champs-Élysées when they premiered in Paris. Both the music and dance were landmarks in modernism.

In 1913 the Ballets Russes toured South America. Diaghilev did not make this journey, because of a fear of sea travel. Free from Diaghilev's supervision, Nijinsky became acquainted with Romola de Pulszky, a Hungarian countess. Eventually, she succeeded in engaging his affections. They were married in Buenos Aires, and later had a daughter, Kyra. When the company returned to Europe Diaghilev flew into a rage, and dismissed Nijinsky.

During World War I Nijinsky was interned in Hungary. Diaghilev succeeded in getting him out for a North American tour in 1916. During this time, Nijinsky choreographed and danced the leading role in Till Eulenspiegel. Around this time, signs of his schizophrenia was noticed by members of the company. He suffered a nervous breakdown in 1919, and his career effectively ended. He was diagnosed with schizophrenia and taken to Switzerland by his wife. He spent the rest of his life in and out of psychiatric hospitals and asylums, as his family travelled round Europe. He never danced again.

All content from Kiddle encyclopedia articles (including the article images and facts) can be freely used under Attribution-ShareAlike license, unless stated otherwise. Cite this article:
Vaslav Nijinsky Facts for Kids. Kiddle Encyclopedia.