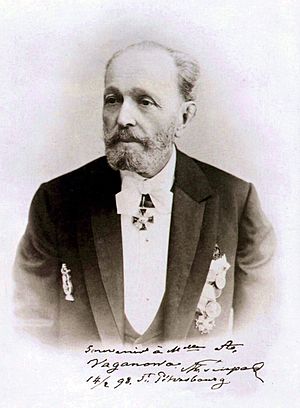 Marius Petipa (1818-1910) was a French dancer and the principal Ballet Master for the Imperial Ballet in St. Petersburg from 1869 until 1903. His works include La Bayadere (1877), a revised Giselle (1884), The Sleeping Beauty (1890), a revised Swan Lake (1895), and Raymonda (1898). Dance historian Lynn Garafola believes Petipa "had an incalculable effect on Russian ballet." She points out that he supervised the transition from Romanticism to Classicism in Russian ballet, and fused the Italian bravura and French lyrical techniques. Garafola writes, "[Petipa] helped transform an art dominated by foreigners and identified with the West into a Russian national expression."

All content from Kiddle encyclopedia articles (including the article images and facts) can be freely used under Attribution-ShareAlike license, unless stated otherwise. Cite this article:
Marius Petipa Facts for Kids. Kiddle Encyclopedia.