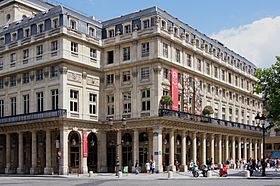 Exterior of the Salle Richelieu 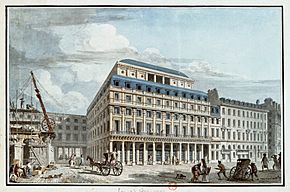 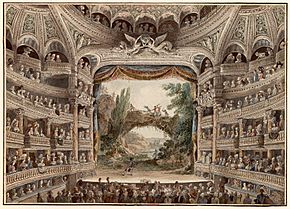 The Comédie-Française or Théâtre-Français is one of the few state theatres in France and is considered the oldest theatre in the world. It is the only state theatre to have its own troupe of actors. The company's primary venue is the Salle Richelieu. The theatre is part of the Palais-Royal complex and located at 2 rue de Richelieu on the Place André-Malraux in the 1st arrondissement of Paris.

The theatre has also been known as the Théâtre de la République and La maison de Molière (English: House of Molière). It inherited the latter name from the troupe of the best-known playwright associated with the Comédie-Française, Molière. He was considered the patron of French actors. He died seven years before “La maison de Molière” was rechristened the “Comédie-Française,” and the company continued to be known popularly by the former name even after the official change of name. 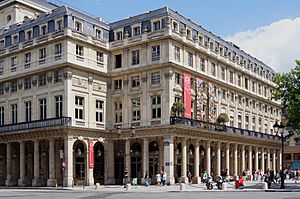 The Comédie-Française was founded by a decree of Louis XIV on August 8, 1680 to merge the only two Parisian acting troupes of the time, the troupe of the Guénégaud Theatre and that of the Hôtel de Bourgogne. On the death of Molière in 1673, the troupe at the Guénégaud had been formed by a merger of the Théâtre du Marais and the Troupe de Molière. Thus the Comédie-Française may be said to have an unbroken tradition reaching back to the days of Molière, and to have had theatre connections for more than a century previous to the death of the great dramatist in 1673. In 1680, the repertoire consisted of the collection of theatrical works by Molière and Jean Racine, along with a few works by Pierre Corneille, Paul Scarron and Jean Rotrou. Two years after the amalgamation of the dramatic companies, they received a royal grant of £12,000 per year; and seven years later they took as their name their present designation of “players of the Comédie Française.”

In the 18th century, the Comédie-Française was often enjoyed by the French nobility, since the price to watch at the theater was expensive.

On the performance of Joseph Chénier's anti-monarchical play Charles IX in 1789, violent political discussions arose among the performers, and ultimately they split into two sections: the Republican party, under the young tragedian Talma, establishing a new theatre under the name “Théâtre de la République,” on the site of the present building in the Rue de Richelieu; while the Royalist section took the title “Théâtre de la Nation.” On 3 September 1793, during the French Revolution, the Théâtre de la Nation was closed by order of the Committee of Public Safety for putting on the allegedly seditious play Pamela, and the actors were imprisoned though gradually released later. On 31 May 1799, the new government made the salle Richelieu available and allowed the actors to reconstitute the troupe.

The Comédie-Française today has a repertoire of 3,000 works and three theatres in Paris (salle Richelieu, next to the Palais Royal; théâtre du Vieux-Colombier; Studio-Théâtre).

The Comédie-Française has had several homes since its inception. In 1689, it was established across from the café Procope. The Odéon was designed by architects Marie-Joseph Peyre (1730–1785) and Charles De Wailly (1730–1798). From 1770 to 1782, the Comédie performed in the theatre in the royal palace of the Tuileries. Since 1799, the Comédie-Française has been housed in the salle Richelieu (architect Victor Louis) at 2, rue de Richelieu. This theatre was enlarged and modified in the 1800s, then rebuilt in 1900 after a severe fire.

The membership of the theatrical troupe is divided into “sociétaires” and “pensionnaires.” The former are regular members of the organisation and as such receive a pension after 20 years of service, while the latter are paid actors who may, after a certain length of service, become “sociétaires.” The names of nearly all the great actors and dramatists of France have, at some time in their career, been associated with that of the Comédie-Française.

All content from Kiddle encyclopedia articles (including the article images and facts) can be freely used under Attribution-ShareAlike license, unless stated otherwise. Cite this article:
Comédie-Française Facts for Kids. Kiddle Encyclopedia.