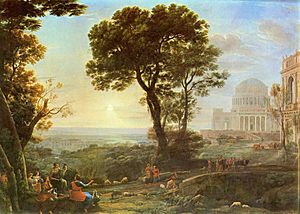 Many of the paintings of the French artist Claude Lorrain (1600s) show beautiful, peaceful, imaginary views of a "Golden Age". This picture is set in Ancient Greece.

Golden age is an expression (or term) that people use when they are talking or writing about a time that is past, when everything seemed to be good.

There are several ways that the term can be used.

This means a time in the history of Ancient Greece when the city of Athens had peace, good government and everyone had enough to eat.

This means a time when many artists in Denmark were painting very fine pictures.

This means that the person speaking says that their time at Harvard University was the happiest in their life.

All content from Kiddle encyclopedia articles (including the article images and facts) can be freely used under Attribution-ShareAlike license, unless stated otherwise. Cite this article:
Golden age Facts for Kids. Kiddle Encyclopedia.