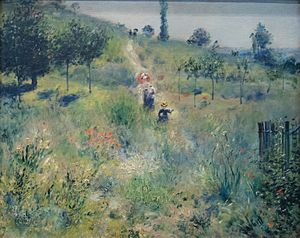 A painting by Renoir which is a work of art.

Art is a creative activity by people. The artist hopes that it affects the emotions of people who experience it. Artists express themselves by their art. Some people find art relaxing.

Many people disagree on how to define art. Some say people are driven to make art due to their inner creativity. 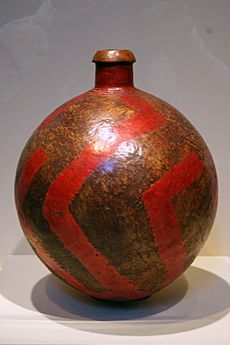 Some people say that art is a product or item that is made with the intention of stimulating the human senses as well as the human mind, spirit and soul.

An artwork is normally judged by how much impact it has on people, the amount of people who can relate to it, and how much people appreciate it.

The first and broadest sense of "art" means "arrangement" or "to arrange." In this sense, art is created when someone arranges things found in the world into a new or different design or form; or when someone arranges colors next to each other in a painting to make an image or just to make a pretty or interesting design.

Art can also be a form of expression of emotion. The artist may feel a certain emotion and feel that there is no way to express it other than to create something that means something to them. Most of the art created in this case is made for the artist rather than an audience. However, if an audience is able to connect with the emotion as well, then the art work may become publicly successful. 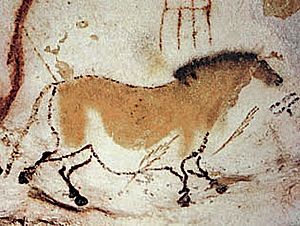 Cave painting of a horse from the Lascaux caves, circa 16,000 BP

There are sculptures, cave painting and rock art dating from the Upper Paleolithic era.

All of the great ancient civilizations, such as Ancient Egypt, India, China, Greece, Rome or Arabia had works and styles of art. In the Middle Ages, most of the art in Europe showed people from the Bible in paintings, stained glass windows, and mosaic tile floors and walls.

In Europe, after the Middle Ages, there was a "Renaissance" which means "rebirth". People rediscovered science and artists were allowed to paint subjects other than religious subjects. People like Michelangelo and Leonardo da Vinci still painted religious pictures, but they also now could paint mythological pictures too. These artists also invented perspective where things in the distance look smaller than things close up in the picture. This was new because in the Middle Ages people would paint all the figures close up and just overlapping each other.

In the late 1800s, artists in Europe, responding to Modernity created many new painting styles such as Classicism, Romanticism, Realism, and Impressionism. The history of twentieth century art includes Expressionism, Fauvism, Cubism, Dadaism, Surrealism, and Minimalism.

In some societies, people think that art belongs to the person who made it, such as Indigenous Aboriginal Australian Art. They think that the artist put his or her "talent" into the art. In this view, the art is the property of the artist.

In other societies, people think that art belongs to no one. They think that society has put its social capital into the artist and the artist's work. In this view, society is a collective that has made the art, through the artist. 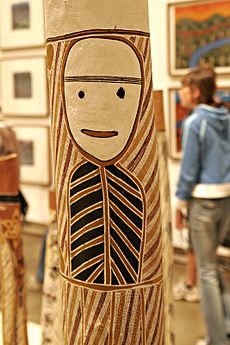 The functions of art include:

Works of art are more or less harmonic and bring pleasure, a sensation of beauty.

Some artists draw what they see the future like, and some of them are right, but most are not...

Art makes us think about it, not about reality; we have a rest.

What did the artist value? What aims did he like/dislike in human activity? This usually is clearly seen in artists' works.

What message, criticism or political change did the artist wish to achieve?

All content from Kiddle encyclopedia articles (including the article images and facts) can be freely used under Attribution-ShareAlike license, unless stated otherwise. Cite this article:
Art Facts for Kids. Kiddle Encyclopedia.