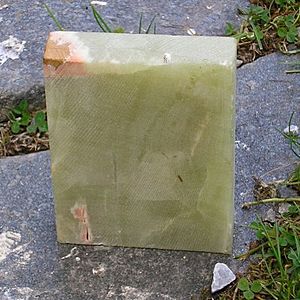 Jade is an ornamental stone. The term jade is applied to two different metamorphic rocks that are made up of different silicate minerals, one being Nephrite jade, the other Jadeite. The two sorts of jade look nearly the same. People only found that they were two different sorts in 1863.

Jade was found about 7000 years ago. Among the earliest known jade artifacts excavated from prehistoric sites are simple ornaments with bead, button, and tubular shapes. Additionally, jade was used for axe heads, knives, and other weapons. Jadeite is about the same hardness as quartz, nephrite is somewhat softer in hardness, Both nephrite and jadeite are tough, but nephrite is tougher than jadeite.

Jade is very hard. In the past, Chinese people and the Maoris used it to make knives and weapons. As metal-working technologies became available, the beauty of jade made it valuable for ornaments and decorative objects. It is beautifully coloured and can be delicately shaped. The Chinese made jewelry out of it. Only the rich could have jade because it was so rare and expensive. It was said that jade had healing powers and it was regarded as very lucky.

Jadeite, with its bright emerald-green, pink, lavender, orange and brown colours was imported from Burma to China only after about 1800. The vivid green variety became known as Kingfisher (feathers) Jade. It quickly replaced nephrite as the imperial variety of jade. 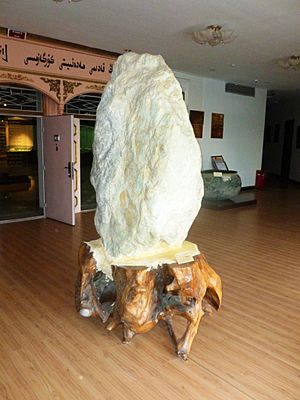 In the long history of the art and culture of the enormous Chinese empire, jade has always had a very special significance, roughly comparable with that of gold and diamonds in the West. Jade was used not only for the finest objects and cult figures, but also in grave furnishings for high-ranking members of the imperial family.

Today, Guatemala produces jadeite in a variety of colours, ranging from soft translucent lilac, blue, green, yellow, and black. It is also the source of new colours, including "rainbow jade" and the unique "Galactic Gold," a black jadeite with natural incrustations of gold, silver and platinum.

Jade is the official gemstone of British Columbia, where it is found in large deposits in the Lillooet and Cassiar regions. It is also the official gemstone of the state of Alaska, found particularly in the Kobuk area. A two ton block of jade sits outside the Anchorage Visitor’s Center in downtown Anchorage, Alaska, mined from near Kobuk and donated to the city as a showpiece. Jade is also the state gemstone of Wyoming, U.S.A.

The 2008 Summer Olympic medals have a ring of jade in them — the first non-metallic substance used in an Olympic medal.

All content from Kiddle encyclopedia articles (including the article images and facts) can be freely used under Attribution-ShareAlike license, unless stated otherwise. Cite this article:
Jade Facts for Kids. Kiddle Encyclopedia.