Romanization of Japanese facts for kids 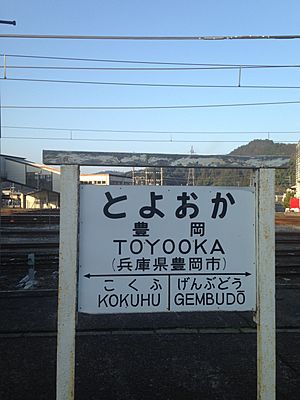 Old sign from the JNR era at Toyooka Station shows inconsistent romanization. Although in principle Hepburn is used, Kokuhu is the kunrei-shiki form (would be Kokufu in Hepburn).

Japanese uses the Roman alphabet as well as kanji, hiragana, and katakana. It is often used to put Japanese words on a computer. When Romanized text is used for Japanese words, this is called romaji.

This chart shows in full the three main systems for the romanization of Japanese: Hepburn, Nihon-shiki and Kunrei-shiki:

This chart shows the differences which can be clearly seen among them.

All content from Kiddle encyclopedia articles (including the article images and facts) can be freely used under Attribution-ShareAlike license, unless stated otherwise. Cite this article:
Romanization of Japanese Facts for Kids. Kiddle Encyclopedia.