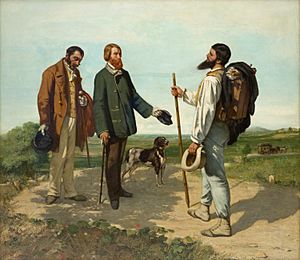 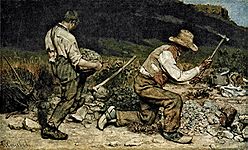 Realism is a word that can be used in many different ways. It is used mainly in the arts to describe the way that writers, musicians, painters etc. thought in the late 19th century. These artists were trying to show the world as it really is, instead of trying to escape to a world of fantasy, which is what the Romantics had been doing. The Realists wanted to give an accurate description of Nature and of the way people lived in society.

Realism in literature was a movement which started in Germany. The poet and writer Heinrich Heine tried in his books to accept the world as it is instead of trying to escape from it. Realistic writers tried to find good things about society.

The interest in Realism led to a movement called Naturalism. This meant describing scenes in nature accurately. The novelist Emile Zola was a Naturalist.

In philosophy, realism has a somewhat different meaning. Realist philosophy is a way of thinking about the world in which things have an existence even if no one is studying them (looking, hearing, smelling, touching them). This was different from older philosophers who said that things only exist because of people who are aware of them. For example: beauty only exists because someone sees something that they think is beautiful. A realist philosopher might say that beauty is there whether anyone sees it or not.

In music there was a movement called Verismo which was the Italian word for “reality”. Verismo was popular in Italian opera around the end of the 19th century and early 20th century. Puccini was an opera composer whose style is typical of Verismo.

All content from Kiddle encyclopedia articles (including the article images and facts) can be freely used under Attribution-ShareAlike license, unless stated otherwise. Cite this article:
Realism Facts for Kids. Kiddle Encyclopedia.