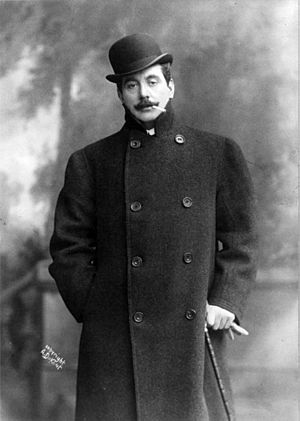 Giacomo Puccini (23 December 1858 - 29 November 1924) was the most famous Italian opera composer after Verdi. He wrote 16 operas, most of which are performed very often today. Many of his operatic songs are known by many people, especially the aria Nessun dorma from Turandot which was sung by Luciano Pavarotti for the BBC’s television coverage of the Football World Cup which was held in Italy in 1990.

Puccini was born in Lucca, Tuscany into a musical family. He was expected to follow the family tradition and become a church organist. He started playing the organ in churches near Lucca. He liked to improvise on the organ, playing popular tunes from Verdi’s operas. He soon realized that he wanted to be an opera composer. Eventually he persuaded his family to let him study at the Milan Conservatory. His earliest compositions showed that he had a great talent for writing beautiful melodies and that he was good at writing for the orchestra. His first opera to be published, Edgar, had a story similar to that of Bizet’s Carmen, but it was not a suitable story for Puccini.

Manon Lescaut was the first opera for which Puccini chose the story himself. It is the same story as Massenet’s opera Manon. This made Puccini internationally famous. His next opera, La bohème, produced in 1896, is often thought to be his best opera. He worked with two poets on this opera and, although they quarrelled a lot, the result was a work in which the music flowed beautifully like a conversation.

His next opera was Tosca. When it was first performed in Rome in 1900 there were rumours that a bomb would be thrown, but nothing happened. Tosca was a great success. However, Madama Butterfly was hissed and booed at its first performance in Milan’s famous opera house La Scala in 1904.

When he finally started writing again his new opera La fanciulla del West was set in the American West at the time of the Goldrush. The music has very Impressionistic harmonies like that of Debussy. The way he writes for the orchestra shows the influence of Richard Strauss. The opera was first performed in New York. The world-famous tenor Enrico Caruso sang the main hero part and Arturo Toscanini was the conductor. With such a star cast it had to be a great success.

Puccini followed this by writing an operetta and two one-act operas. The best of these is Gianni Schicchi His last opera is Turandot, which has a fairy-tale like story. While he was working very hard at it he developed throat cancer. He died of complication of the disease in autumn 1924 in Brussels. The whole of Italy went into mourning and Mussolini spoke at the funeral. Puccini had not quite managed to finish Turandot. A man called Franco Alfano finished it using the sketches that Puccini had left.

All content from Kiddle encyclopedia articles (including the article images and facts) can be freely used under Attribution-ShareAlike license, unless stated otherwise. Cite this article:
Giacomo Puccini Facts for Kids. Kiddle Encyclopedia.