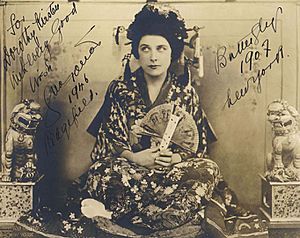 Geraldine Farra as Madama Butterfly at the Metropolitan Opera about 1907

Madama Butterfly is an Italian opera in three acts with music by Giacomo Puccini. The libretto was written by Giuseppe Giacosa and Luigi Illica. It was based on a play by David Belasco. The opera was first performed in Milan, Italy, on February 17, 1904. Its revised version was performed in Brescia, on May 28, 1904. Although a fiasco at its premiere, it soon established itself in its revised version as one of the most beloved of operas.

All content from Kiddle encyclopedia articles (including the article images and facts) can be freely used under Attribution-ShareAlike license, unless stated otherwise. Cite this article:
Madama Butterfly Facts for Kids. Kiddle Encyclopedia.