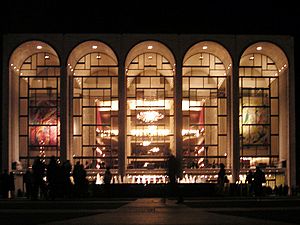 The Metropolitan Opera Association is a big organization in New York City which puts on performances of opera. The Metropolitan Opera House (often simply called: The Met) is one of the most famous opera houses in the world. It was started in 1880. Today the music director is James Levine.

All content from Kiddle encyclopedia articles (including the article images and facts) can be freely used under Attribution-ShareAlike license, unless stated otherwise. Cite this article:
Metropolitan Opera Facts for Kids. Kiddle Encyclopedia.