Kids Encyclopedia Facts
In this article, the patronymic is Abisalovich and the family name is Gergiev. 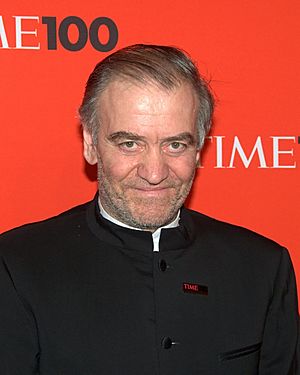 Valery Abisalovich Gergiev (Russian: Вале́рий Абиса́лович Ге́ргиев, IPA: [vɐˈlʲerʲɪj ɐbʲɪˈsaləvʲɪdʑ ˈɡʲerɡʲɪjɪf]; Ossetian: Гергиты Абисалы фырт Валери, tr. Gergity Abisaly fyrt Valeri; born 2 May 1953) is a Russian conductor and opera company director. In 1988 he became general director and artistic director of the Mariinsky Theatre and artistic director of the White Nights Festival in St. Petersburg. He was chief conductor of the Munich Philharmonic from September 2015 until he was dismissed on 1 March 2022.

Gergiev was born in Moscow. He is the son of Tamara Timofeevna (Tatarkanovna) Lagkueva and Abisal Zaurbekovich Gergiev, both of Ossetian origin. He and his siblings were raised in Vladikavkaz in North Ossetia in the Caucasus. He had his first piano lessons in secondary school before going on to study at the Leningrad Conservatory from 1972 to 1977.

His principal conducting teacher was Ilya Musin. His sister, Larissa, is a pianist and director of the Mariinsky's singers' academy.

In 1978, Gergiev became assistant conductor at the Kirov Opera, now the Mariinsky Opera, under Yuri Temirkanov, where he made his debut conducting Sergei Prokofiev's War and Peace. He was chief conductor of the Armenian Philharmonic Orchestra from 1981 until 1985 – the year he made his debut in the United Kingdom, along with pianist Evgeny Kissin and violinists Maxim Vengerov and Vadim Repin at the Lichfield Festival. 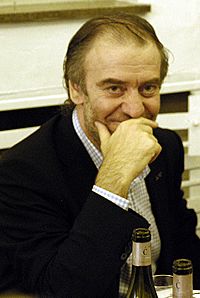 Gergiev in Brussels in 2007

In 1988, Gergiev guest-conducted the London Symphony Orchestra for the first time. In his next appearance with the LSO in 2004, he conducted the seven symphonies of Sergei Prokofiev. This engagement led to his appointment in 2005 as the Orchestra's fifteenth principal conductor, succeeding Sir Colin Davis with effect from 1 January 2007. Gergiev's initial contract with the LSO was for 3 years.

In 1991, Gergiev conducted a western European opera company for the first time, leading the Bavarian State Opera in a performance of Modest Mussorgsky's Boris Godunov in Munich. In the same year, he made his American début, performing War and Peace with the San Francisco Opera. Since then, he has conducted both operatic and orchestral repertoire across the world. He also participates in numerous music festivals, including the White Nights in St. Petersburg.

After the 2004 Beslan school massacre, Gergiev appealed on television for calm and against revenge. He conducted concerts to commemorate the victims of the massacre.

His first official concert as principal conductor of the LSO was on 23 January 2007; it was originally scheduled for 13 January, but was postponed due to Gergiev's illness.

In April 2007 Gergiev was one of eight conductors of British orchestras to endorse the ten-year classical music outreach manifesto, "Building on Excellence: Orchestras for the 21st century", to increase the presence of classical music in the UK, including giving free entry to all British schoolchildren to a classical music concert. 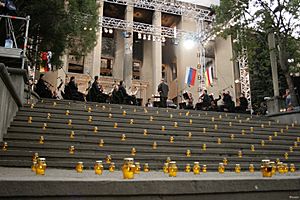 During the 2008 South Ossetia war, Gergiev, who is of partial Ossetian heritage himself, accused the Georgian government of massacring ethnic Ossetians, triggering the conflict with Russia. He came to Tskhinvali and conducted a concert near the ruined building of the South Ossetian Parliament as tribute to the victims of the war.

In June 2011, Gergiev joined the International Tchaikovsky Competition and introduced reforms to the organisation.

In 2015 Gergiev became chief conductor of the Munich Philharmonic, but his contract was terminated in March 2022 after he refused to condemn the 2022 Russian invasion of Ukraine.

In March 2016, Gergiev conducted the Vienna Philharmonic Orchestra on a South American tour. The programme included Tchaikovsky’s Manfred Symphony in B minor, and Wagner’s prelude from “Parsifal” – usually executed together with the “Good Friday Music” from the same opera. Performances took place in two consecutive nights at the prestigious Sala São Paulo hall - home of the São Paulo State Symphony Orchestra. The last concert included a single appearance with the Vienna Philharmonic in Bogotá, Colombia.

On 5 May 2016, Gergiev performed at the Roman Theatre of Palmyra at a concert event called Praying for Palmyra – Music revives ancient ruins. It was devoted to the victims who died while liberating Palmyra from ISIS.

Gergiev has been, according to Alex Ross in The New Yorker, "a prominent supporter of the current Russian regime" of Vladimir Putin. In 2012, in a television ad for Putin's third Presidential campaign, he said: "One needs to be able to hold oneself presidentially, so that people reckon with the country. I don't know if it's fear? Respect? Reckoning."

In New York City in 2013, the LGBT activist group Queer Nation interrupted performances by orchestras conducted by Gergiev at the Metropolitan Opera and Carnegie Hall. ..... In London, the veteran activist Peter Tatchell led anti-Gergiev demonstrations. In a public statement Gergiev replied: "It is wrong to suggest that I have ever supported anti-gay legislation and in all my work I have upheld equal rights for all people. I am an artist and have for over three decades worked with tens of thousands of people and many of them are indeed my friends." ..... But I have too busy a schedule to explore this matter in detail.'" On 26 December 2013, the city of Munich made public a letter from Gergiev assuring them that he fully supports the city's anti-discrimination law and adding: "In my entire professional career as an artist, I have always and everywhere adhered to these principles and will do so in the future... All other allegations hurt me very much."

In March 2014 he joined a host of other Russian arts and cultural figures in signing an open letter in support of the Annexation of Crimea by the Russian Federation. The letter was posted on the website of Russia's culture ministry on 12 March 2014. In the letter signatories stated that they "firmly declare our support for the position of the president of the Russian Federation" in the region. However, in September 2015, as he became chief conductor of the Munich Philharmonic, Gergiev said that he did not really sign the letter to Putin, but only had a phone conversation about it with Vladimir Medinsky. The New York Times reported that Russian artists may have been pushed by the Russian government to endorse the annexation of Crimea. The article specifically mentioned Gergiev, who faced protests in New York City while performing. After a public outcry in the country, the Ukrainian Ministry of Culture blacklisted Gergiev from performing in Ukraine.

Terminations after 2022 Russian invasion of Ukraine

Following the 2022 Russian invasion of Ukraine, the Rotterdam Philharmonic Orchestra said that it would drop Gergiev from its September festival if he did not stop supporting Putin. Milan's La Scala also sent a letter to Gergiev asking him to declare his support for a peaceful resolution in Ukraine or he would not be permitted to complete his engagement conducting Tchaikovsky's The Queen of Spades. This followed an announcement by New York City's Carnegie Hall that it had canceled two May performances by the Mariinsky Theatre Orchestra that were to be conducted by Gergiev, and the Vienna Philharmonic dropping Gergiev from a five-concert tour in the U.S. that was to start on 25 February.

On 28 February, the Verbier Festival requested and accepted Gergiev's resignation as Music Director of the Verbier Festival Orchestra. On 1 March, Munich's mayor Dieter Reiter announced the termination of Gergiev's contract as conductor of the Munich Philharmonic for failing to respond to a demand that he condemn the "brutal war of aggression that Putin is waging against Ukraine and now, in particular, against our sister city of Kyiv". On 13 October, has been expelled from his position as a foreign member of the Royal Swedish Academy of Music for his reluctance to condemn Russian invasion of Ukraine.

In 1999, Gergiev married musician Natalya Dzebisova—a teenager at the time, 27 years his junior, and also of Ossetian descent. They have three children together: two boys and a girl. From time to time, Gergiev has been reported to be a friend of Putin; they have been said to be godfathers to each other's children, but in a letter to The Daily Telegraph Gergiev rejected this notion. From a past relationship with the language teacher Lena Ostovich, he has another daughter, Natasha.

In April 2022, the Anti-Corruption Foundation of Russian Kremlin critic Alexei Navalny released a video revealing the immense wealth of Gergiev, including various properties in Italy (among others Palazzo Barbarigo in Venice), the U.S. and Russia. A significant part of his wealth is said to stem from the inheritance of Yoko Nagae Ceschina.

Gergiev has focused on recording Russian composers' works, both operatic and symphonic, including Mikhail Glinka, Pyotr Ilyich Tchaikovsky, Alexander Borodin, Nikolai Rimsky-Korsakov, Sergei Prokofiev, Dmitri Shostakovich, Igor Stravinsky and Rodion Shchedrin. Most of his recordings, on the Philips label, are with the Kirov Orchestra, but he has also recorded with the Vienna Philharmonic. Recent undertaking such as the complete Prokofiev symphonies (from the live concerts of 2004) and a Berlioz cycle, are with the London Symphony Orchestra.

Gergiev's recording of Prokofiev's Romeo and Juliet with London Symphony Orchestra on LSO Live in 2010 was voted the winner of the Orchestral category and the Disc of the Year for the 2011 BBC Music Magazine Awards.

All content from Kiddle encyclopedia articles (including the article images and facts) can be freely used under Attribution-ShareAlike license, unless stated otherwise. Cite this article:
Valery Gergiev Facts for Kids. Kiddle Encyclopedia.