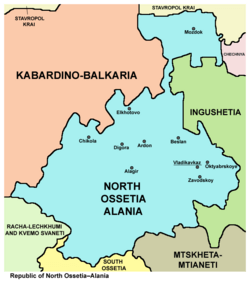 The Republic of North Ossetia-Alania (Russian: Респу́блика Се́верная Осе́тия–Ала́ния) is a small republic in the north of the Caucasus which is part of Russia.

In the Middle Ages it was called “Alania”. Since 1804 it has been under Russian control. When the Soviet Union was breaking up in the early 1990s there was a lot of nationalistic feeling in the area. Some Ossetian people wanted to call the country Alania again. In November 1994 the name of Alania was added to the republican title (Republic of North Ossetia-Alania).

A lot of people have come to North Ossetia as refugees because of the wars in neighbouring countries of Chechnya and South Ossetia.

All content from Kiddle encyclopedia articles (including the article images and facts) can be freely used under Attribution-ShareAlike license, unless stated otherwise. Cite this article:
North Ossetia-Alania Facts for Kids. Kiddle Encyclopedia.