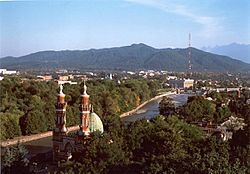 A view of Vladikavkaz

Vladikavkaz (Russian: Владикавка́з, lit. ruler of the Caucasus, formerly known as Ordzhonikidze (Орджоники́дзе) and Dzaudzhikau (Дзауджика́у), is the capital city of the Republic of North Ossetia-Alania, Russia. It is in the southeast of the republic at the foothills of the Caucasus Mountains, on the Terek River. As of 2010, 311,693 people lived there.

It is one of the most populous cities in the North Caucasus.

The city is an industrial and transportation center. Manufactured products include processed zinc and lead, machinery, chemicals, clothing and food products.

All content from Kiddle encyclopedia articles (including the article images and facts) can be freely used under Attribution-ShareAlike license, unless stated otherwise. Cite this article:
Vladikavkaz Facts for Kids. Kiddle Encyclopedia.